Wait, so you need to have deposit accounts with BoA to get approved for their premium rewards card?  I have not read about this prior to now.  Glad I never apped, as that would have been a denial for me.

no it just helps..Don't take what everyone says as gospel.  Many have been approved without relationships, but relationships certainly help you are more of a credit hungry person.

If you don't have a relationship with bofa , like checking or ML + 5k at least , don't app 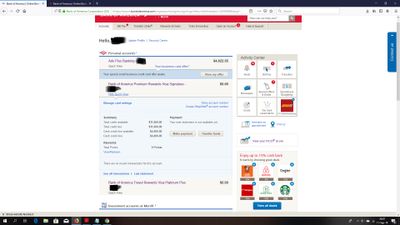 Wait, so you need to have deposit accounts with BoA to get approved for their premium rewards card?  I have not read about this prior to now.  Glad I never apped, as that would have been a denial for me.

Yeah, from what I've read on My Fico, the Premium Rewards card seems to be one of the most difficult to get, even more so than more highly-desired and more expensive "premium" cards from other major banks.  Bank of America is definitely a 'relationship bank.'

I'm not saying deposits are mandatory; just that it seems to be a huge help.  Secondary to having BofA accounts, it seems the other major factor is how many new inquiries and accounts are on a report, indicating higher than normal credit-seeking or sub-chasing.  Not that FICO or income or DTI doesn't come into play also; I'm sure it does.  But this card seems to weigh relationship (deposits) and overall credit activity heavier than many other cards.

I would imagine the strict underwriting is due to the generous SUB.  They won't casually give out a $500 SUB (50K points) to someone who hasn't been a client or who is considered a higher risk to churn the card for the reward, in my estimation.   They apparently don't mind shelling it out for the attraction of legitimate new business but are very selective.  I plan to apply but I'm not churning a SUB.  I agree with @blackfines1 that it appears having deposits with them but particularly Merrill Lynch (even if it's not a huge amount) can make all the difference.  It shows a longer-term commitment to the bank.

I'll note my relationship with BofA as an example.  I opened checking and savings accounts with them in 1998, used them heavily as one of my primary accounts, and kept them with my ex until we divided our finances about 15 years later.  I have had a credit card with them in good standing since 2000.  My current credit product is the Cash Rewards card, and they recently extended my credit line to $50K.  The card has remained active and I've even paid off some large five-figure balance transfers that I made to it years ago.   I have had no deposits with them for the past 6 years, and never had a car loan or mortgage.  My current credit login shows me prequalified for the basic Bankamericard and the Travel Rewards card, not the Premium Rewards.  Reading between the lines, I think I'd greatly improve my chances of approval if I moved some money and reestablished more of a banking relationship.  I might get approved as-is for Premium Rewards, but it appears less likely than the other cards since there is no preapproval.  It appears having other credit products (even long-standing) or a prior banking relationship has less significance than having current deposits and/or investments.

I'd think they'd want the card to be approved just as much as their other cards, as it lines them up for an annual account receivable in the form of that AF.

I'd think they'd want the card to be approved just as much as their other cards, as it lines them up for an annual account receivable in the form of that AF.

That's true ... except only for someone who gets the SUB and then keeps the card for the long-haul... and then doesn't take full advantage of its' offerings.

Because actually ... this is a card that will literally pay for itself and then put money directly in your pocket if you use it just a little, not even counting the cash rewards rate.  The Fee is $95.  But they reimburse TSA Global Entry 1x every 4 yrs for $100 ($25 annual value).  And they directly reimburse $100 in airline incidental fees. So basically, if you use the card a couple of times a year, you actually MAKE money just carrying it.  It's not such a fee generator as the more expensive travel cards that don't reimburse you so directly for all your fees.

This is a related offer to the Premium Rewards Credit Card:

Plus, having investments that qualify you for the

Preferred Rewards Program gives you 25 to 75%

Congratulations on your approval.

Congrats on the approval!

For more data points I was approved for this card with a 21k starting limit. Scores were around 800. I did have a BOA BBR card with a 60kish limit and didhave a savings account with them, but only kept $300 or so in it that my BBR deposited to. I had just enough in the savings account to keep it free.

So you don't need a huge balance in checking, savings or retirement account to get the card. Not saying it doesn't help, but not required.