Late 2014, wife and I filed for BK7 due to a repo. Financially, we were in the dumps. Just had our second child and work was slow, I could not afford to keep the vehicle. With the repossession, looming and nowhere to go, we decided to file. Took nearly a year to get anything sort of Credit from anyone. USAA our main bank shut us down and limited our access to our own accounts forced to look somewhere anywhere else that didn’t treat us like criminals. We opened a new checking account with a Travis Credit Union (a small local CU. Right down the street a new Credit Union was on the verge of opening, Navy Federal Credit Union. Never heard of them. So I decided to go in an inquiry what qualifications were needed to open an account there. Both parents served 24 and 22 years and I myself serve though it was very short. I was accepted even with my BK7 like 3 months out. When I signed up they offer some credit cards and asked if I was interested. At the time, I was scared and decided not to.

A month went by and I found this forum. A lot of good information on how to rebuild and learned better money management, though I feel like I slip every now and then.😂 lurked in the darkness and replied to people on the forums here and there. With a renewed energy, I decided to apply for a credit card. To my amazement, I was accept for a secured credit card. Gladly put some money down and started to rebuild. Though I went a tougher road and patience is not a Something I have been very good at. I applied for a few other accounts some accepted and some denied. A year after opening my secured account, I called in asking to graduate this card. They said if it happens it will be 13 months in. So I waited 13, 14, 15 months... and nothing. I called towards the end of the 15 months and they said in a nice way but I got. “ it wil graduate when it is ready” lol. Not sure what the hold up was, but my credit score was on the rise!! What’s with NFCU? I opted to apply for th cash rewards card. Went to manual review and maybe a day passed and I received a secure message regarding the application for the cash rewards.

“Congratulations, your card was approved for $2,000 dollars.” About 18 months out of BK7. Stoked and a little mad the secure card didn’t graduate and remember the lack of patience that I mentioned above.... I closed the secure card down. The cash rewards card has grown a little. Started at $2k then went to 3.5k soft pull by me during the AR time. Another 6 to 8 months, I opened my statement and to my shock, I saw it jump to 6.5k. I called NFCU to verify I was not seeing things and if it was a typo. The rep started laughing and said, “No sir. The limit I see is right. Your CL is $6500!” By the way, are you aware of the signature status your card now qualifies for?” Signature was something that I had read here in the forums and though I would never see the day... I tried my best to remain calm and said, “Mmmm. No, what is this signature program you speak of?” The rep proceeded to explain this to me, though I was to busy dancing to hear what he said. I just replied, “ sound good, how to I apply?” Again he laughed and said, “ Nothing. I will processed some paperwork and your receive your new card in the mail and information regarding the program in a few days.” Absolutely in heaven. For some of you, a signature card is a normal deal. But for me, it was a victory. Even if no one sees or know what that little signature signifies... but every now and then, someone will says, “oh this is a signature card,” smile, then hands my card back. I smile too because they know what that means.

Fast forward to last night, I was looking at my accounts with NFCU and saw this pre qualifying ad and thought.... naaaa I think I’m good...without it. Somehow by the end of the day, I decided to app for the NFCU More Rewards Amex.... applied online, but something was going on with the website, so I decided to call. Just a few days ago, I was approved for a auto loan with NFCU and receive the check via FedEx. The plans to buy a new car didn’t go as planned and here I was sitting on this blank check.... after I called in and submitted my application. The rep said, “it going in to manual review, you will get more information within 24 to 48 hours”. As most of you already know, that feeling like a lifetime. As I sat there in my dining room table just thinking, “why a manual review?” Then I saw the blank check from NFCU.... and though maybe it has something to do with the recent auto loan I applied for. Immediately, called NFCU loan dept. and informed the rep that I was no longer on the market for a new car and would like to cancel this check. After a few minutes, the loan application is now close and “please write void on check and mail back to us”. Immediately instant messaged the application dept about the recent Credit card application for the More Rewards Amex and informed that I was planning on buying a car, but no longer looking and canceled the loan. When I woke up this morning and checked the status of my application.... it read. 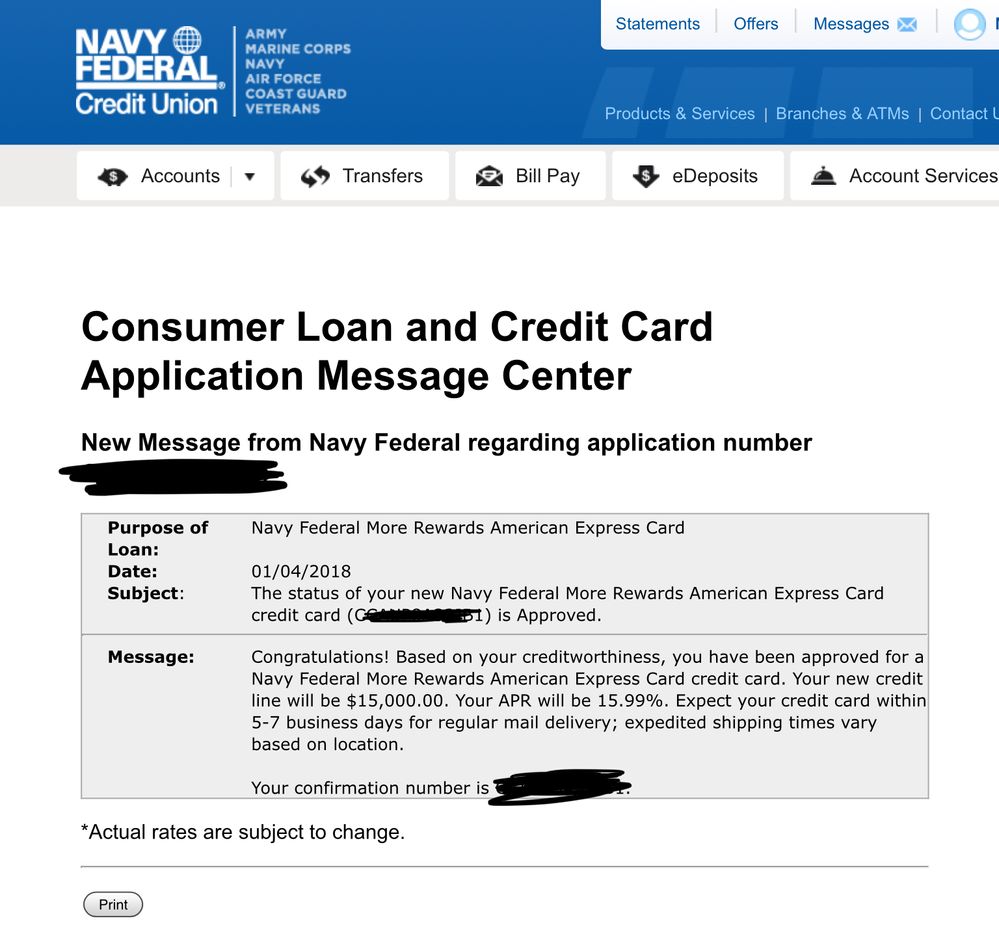 Prior to me filing, my highest limit was 3k with BofA. I was approved for a venture card last month for $10k and then this!!! If I could pass on one message from this thread to someone like me just coming out of BK and lost a little... be patient. It took time to get where you are and it will take time to climb out. Don’t get all caught up in some early success some people have coming out of BK with approvals with large SL. I slipped a few times on my rebuild, never late!!! Just spending a little more than I should have... but easily reminded by the reality that is, I had to file due to certain circumstances and that is a place I NEVER want see or live through....AGAIN.

Good luck and stay strong. Now off to garden a long time... the next step is a big one. Home Ownership!

Congrats m8, but i wont read the whole thing......you got approved that's what matters.

😂 yes sorry for the long winded thread. Thanks for skimming!
Message 4 of 19
2 Kudos

Congrats there! Nice to see you and your DW's hard work pay off!

Congrats on your success!

Congrats m8, but i wont read the whole thing......you got approved that's what matters.

Message 10 of 19
2 Kudos
† Advertiser Disclosure: The offers that appear on this site are from third party advertisers from whom FICO receives compensation.