@Harmony12, that is correct. In fairness, I haven’t tried to increase the Delta as it’s not a very important card to me. I don’t fly often but I do use the card and have almost 40k miles saved up. By the time I need to fly again, I’ll be able to cover it. I don’t see it being worth the AF to me, but it was waived for the first year. After its anniversary I’ll probably downgrade to the Blue since as stated, it’s not an important card to me.

I have the two Hilton cards because when we travel, we stay at Hampton Inn - prices are very reasonable and they’re one of the nicer hotels at the price point. I got the no-fee base HH card at the same time as the DG, and got the Ascend four months later. The Ascend is definitely a keeper for me even with the $95 AF. The points earning structure is notably better, it imparts complimentary Gold status at Hilton properties, and included Priority Pass access and membership at no charge. I’ve heard that’s not anything special these days but it’s still there nonetheless. After the base card passes its anniversary, I’ll move any amount of its limit to the Ascend that I can, and close it - I don’t need two Hilton cards.

BCP is a great card for the fee - I can offset that without much effort via grocery/gas/streaming, and it has a lot of growth potential.

Gold is my first charge card so I’m feeling it out as I’ve never had one. It’s also my first foray into MRs and I’ll have to see how well they transfer value-wise. It does overlap the BCP in that they both reward grocery spend, but that’s ok because Gold also offers 4x earning on restaurants, 3x on airfare, and gives other perks like roadside assistance. And a charge card does not figure into utilization so theoretically you can run a much larger amount of spend through it without affecting your UTI and scores because of that. The fee isn’t insignificant at $250 but to me was definitely worth absorbing the first year in order to see how well it works for my lifestyle. If it doesn’t turn out to be worth it, well I can call it a $250 lesson and I can eat that without trouble. So far so good though, I think it’ll be a keeper.

For any of the cards with fees, you just need to look at your spending and see which ones align. Figure out based on rewards, how much you’d need to spend in the category or categories offered, and see if your normal use is enough to offset the fee. If so, then it’s probably a good fit.

As far as the hype of Amex goes, it’s just nice to keep one of their decent cards around. They have good transfer partners. I’ve made use of their ticket pre-sales before which saved me more than my AF in one transaction.

But out whether or not it becomes your every day spending card is just personal preference. There are a lot of good options these days.

For my first AmEx, I app'd for the BonVoy Brilliant with a Ex 696 and got approved for SL $8K. I had seen the "Hey (your name), you're pre-approved... get a decision in 30 seconds, etc etc". I saw it again 2 months later and decided to pull the trigger for Delta Reserve but was denied. I then tried for Delta Plat and got approved but only SL $1.4K. SP only thankfully. Moved $1K over from my BonVoy Brilliant, and asked for CLI on it to $14K and was approved. So moral of the story is, wait or get a lower SL.
Starting:

@paulesport wrote:
For my first AmEx, I app'd for the BonVoy Brilliant with a Ex 696 and got approved for SL $8K. I had seen the "Hey (your name), you're pre-approved... get a decision in 30 seconds, etc etc". I saw it again 2 months later and decided to pull the trigger for Delta Reserve but was denied. I then tried for Delta Plat and got approved but only SL $1.4K. SP only thankfully. Moved $1K over from my BonVoy Brilliant, and asked for CLI on it to $14K and was approved. So moral of the story is, wait or get a lower SL.

I got this card a month or so back and was only approved for a 1K SL though my scores are higher than yours. But i got the 50K points bonus by applying incognito and just received the 50K bonus today before even statement generation. My offer was 50K for 1K spend.

If you work for a large corporation, I think Amex will approve you if your company tells them to. My company tells Amex to check credit, and, my company sets limits on the card for users with bad scores. I know because I am one of them. This is part of what shocked me into my credit-build phase this year. My corporate Amex has some spend limits (such as $100 retail) because my company told Amex to set those limits. I don't remember the overall limit but I remember it's enough for any travel I'd do. I don't know what your company's policies may be. From the Amex side, I think they don't care about your personal credit since your company will pay anyway. That is, assuming your company pays and it's not a reimbursement scenario.

My credit was really bad when I was approved (500s with a paid charge-off and nothing positive on it, or maybe one secured card, not sure exact date). Without knowing differences between our companies' policies, my guess is that you'd be approved with room to spare. For context, I was denied for Discover secured after being approved (with spending limits) for a corporate Amex.

Given that the issue would be with your company and not with Amex, I don't think a personal Amex will matter beyond whatever effect it would have on your credit overall.

No derogs, but tons of inquiries and heavy credit-seeking behavior. In March of 2019, I had no open accounts, a charge-off, two collections, and scores in the low 500s. What I call the "thick build method" worked for me, but may not work for every situation.
Cards

Okay, I'm going to try to answer many of the questions. It is the Amex Corporate Green card with a very large global company. I have seen people denied an Amex corporate card and I have also seen some get approved but with very low limits.

How large!   I worked at a Fortune 20, and my memory is more in line with what RichHowe says, and I don't remember anyone being denied.  (Caveat: it is JUST possible that once someone was denied, their first thought wasn't "I MUST tell LTL that I was denied!")

And if possible just confirm the policy.   My company had the rules:

1) You MUST use the Amex card for all business travel

2) If you don't have an Amex card, you can use your personal card and get reimbursed

with no apparent concern about the lack of consistency.   (And from time to time I "forgot" to use the corporate card for some expense and used my own, and there was no problem).    But of course your company might be stricter.

So my scores slightly increased today. I checked the Amex site again to see if my pre-qualification changed. Well, it changed to a higher SUB and it actually gave me approximate SL. It looks like I will only get up to $1k SL which is small like you all have said. My EX score is now 653 compared to 649 when I originally got pre-qualified. 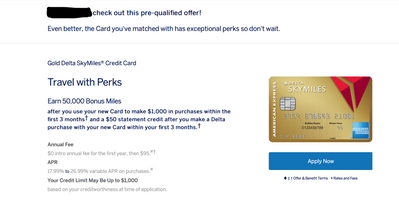 I would be very careful about Amex. They will give today and take the next day. I use to have 3 of their cards. They can do crappy buiness.

How'd you pick up the Hilton and Delta Gold in 1 HP? I was told that the 1 HP only worked for a charge/revolver combo, not for 2 revolver apps? I have the Amex ED, prequal for Gold/Green. Looking for Delta Gold and Hilton card next for travel.

I got a targeted offer from Amex/Delta for 70k bonus but when I went to the prequalify page on amex it says I didn't have any offers lol. I like getting the mails better lol.
Message 40 of 45
0 Kudos
Reply
† Advertiser Disclosure: The offers that appear on this site are from third party advertisers from whom FICO receives compensation.