Few months ago, I posted the following thread: HSBC HSBC Premier World Elite Mastercard Approval & Same Day Personal Loan Approval (21k; cc; 30k lo... In a nutshell, I was approved for large credit limits after qualifying for a Premier Relationship and decided to move all of my assets to HSBC Bank from Chase. If you would like to learn more, I encourage you to read the data from the Consumer Financial Protection Bureau specifically on "Managing an Account" with HSBC Bank USA. To summarize, HSBC has

473 out of 1,849,608 total complaints filed from consumers related to "Managing an Account" with most complaints related to account holds and freezes. Moreover, recent Consumer Affairs complaints indicate an influx of complaints from customers who have their accounts blocked. It appears to be a common practice. See more here.

I must disclose here that I was aware that HSBC is well-known for placing account holds for extended period on consumer accounts. Nevertheless, I was stubborn and thought that this wouldn't happen to me as I never had any issues with account holds or bank freezes. My income derives from a private practice firm in which I am an employee and a private business that my family owns. I have not received any income from foreign sources outside of the United States in case you are wondering.

Below is a timeline of events:

1/ Accounts were blocked due to a credit card payment

2/ One week later, accounts were blocked again due to a credit card payment (same bank account as first)

2/  Block related to my personal loan because after they approved the loan and I signed the promisary note, HSBC had determined that "additonal information is needed to release the proceeds". Up to date, I am not able to get a copy of the promisary note which I had signed after requesting it multiple times.

3/  Final account block due to income disrepency which was placed after providing evidence of income.

The above report does not include 3-4 additional holds that were recorded on my end.

A block with HSBC is tied up to all of your accounts. For instance, if they block your credit card account it will likely result in all of your account blocks (including checking accounts) which means that you would not be able to make any transfer (ACH, wire or check deposits) and if you have your bills as recurring they will likely be returned back and you will be charged NSF fees. You will likely not able to log to your account, in other words, it's a complete shutdown.

All of my accounts have been frozen for the past month for an indefinite period. As of today, one month later after the final account hold, no one from HSBC is able to answer any questions and provide a timeframe as to when I will be able to withdraw my funds from HSBC and close all of my accounts.

I have raised multiple complaints with HSBC and have attempted to contact the employees responsible via telephone or email. I have left multiple voicemails prompting them to call -- all in vain. HSBC is the type of bank where promises are made to be broken and lies are meant to be kept.

HSBC's customer service is in India including most of their Premier Relationship CSR and Fraud Department CSR. While I am delighted with the services that I have received from overseas CSR with other banks (mainly in India/Philippines), I am afraid to tell that there's a quality issue with HSBC Bank USA. A simple call with HSBC goes around 30-50 min in length because of the inability to CSR's to transfer you to the right department which results in endless transfers between multiple departments. I have recordings of various conversations I had with them and even decided to count once the number of times I was transferred = 9 times around the same departments back and forth even spoke with the same representatives.

Attached are the letters and the relevant correspondence related to the above holds. If you would like to learn more about this in detail, I encourage you to read below.

Obviously, everyone decides for himself, but I want to alert you all in case you are ever thinking of doing business with HSBC Bank USA.

Edit: If you are considering opening an account because of the bonus payoff ($600/$750), there are a handful of complaints on HSBC not paying out this bonus (after meeting the requirements, of course). Read more here: CFPB Bonus Complaint Facebook and many more 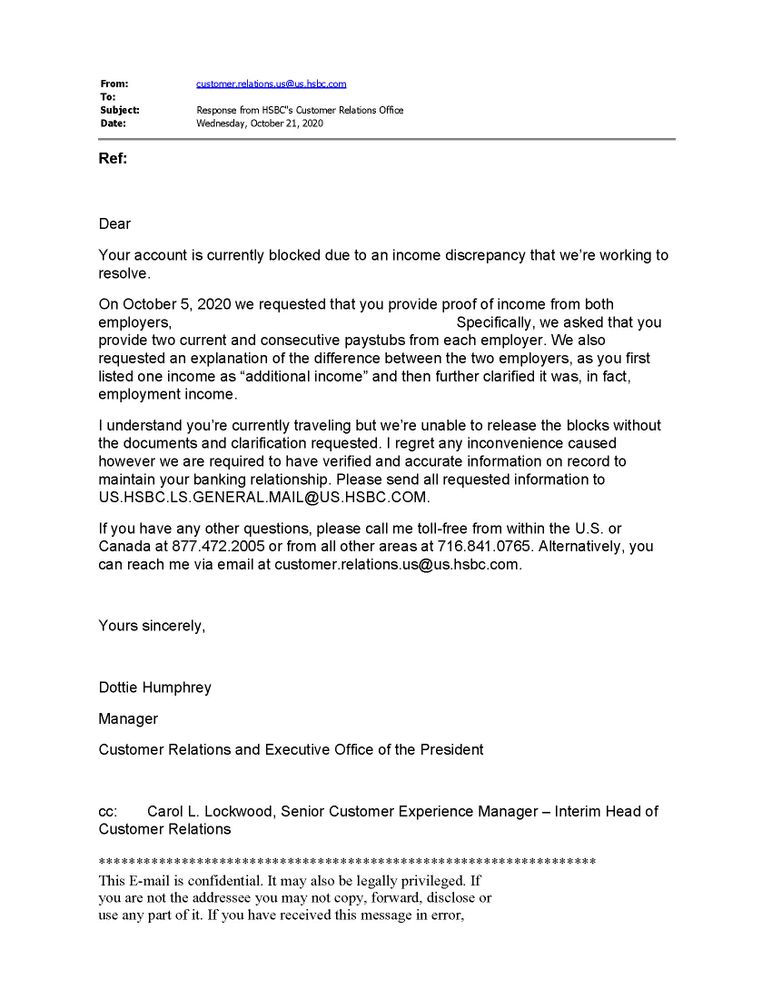 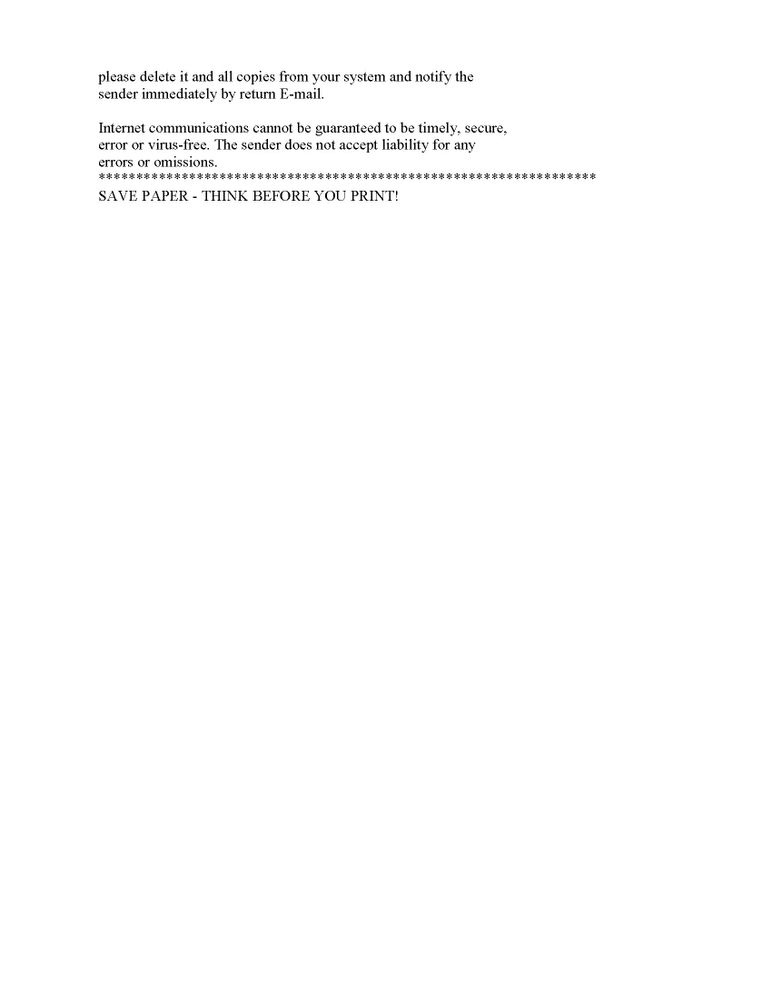 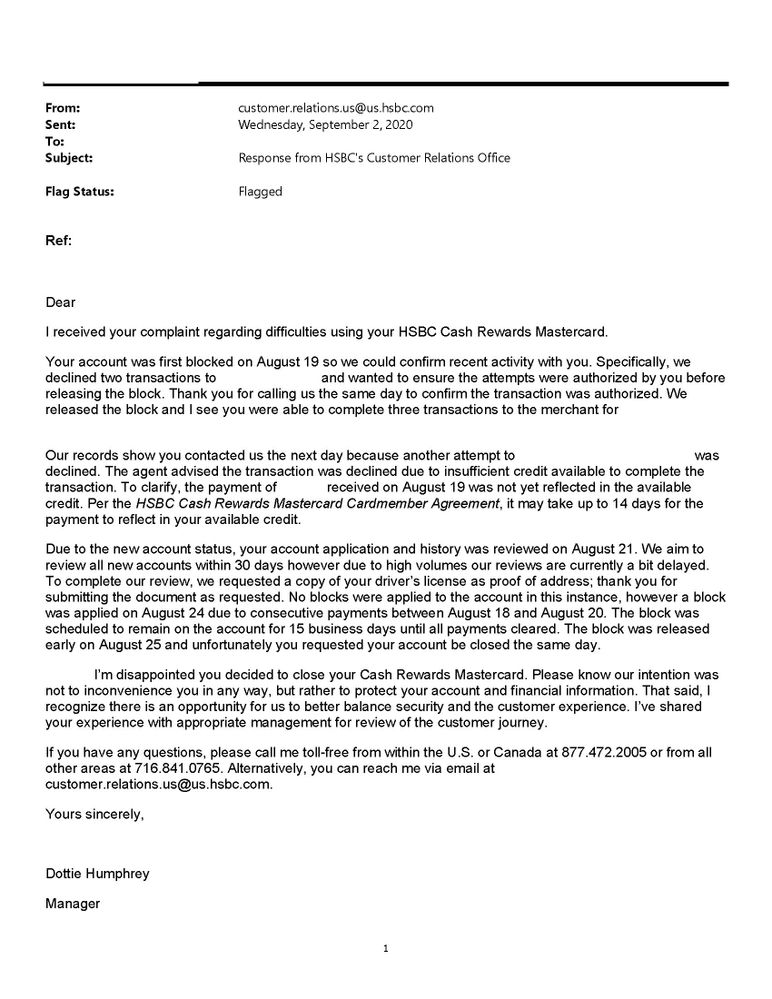 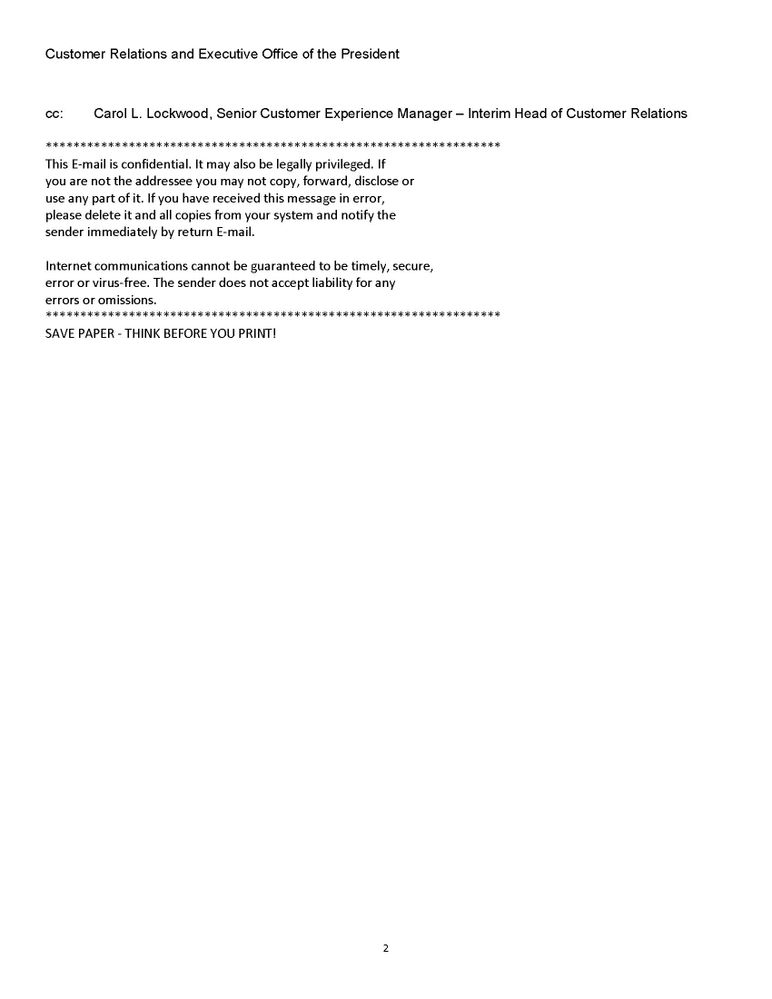 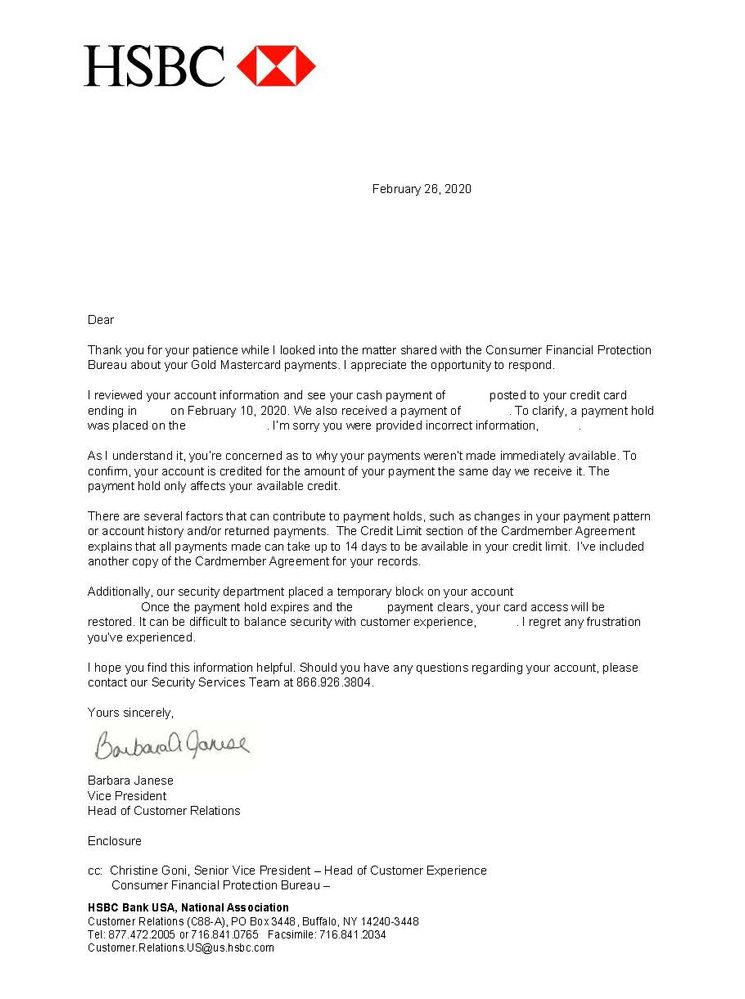 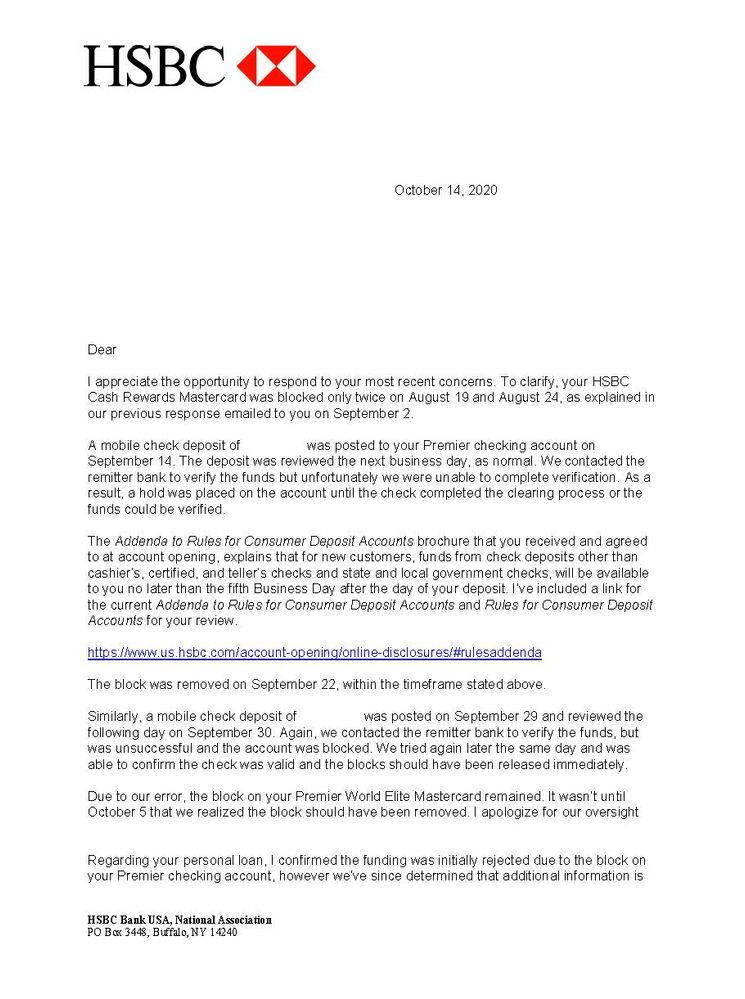 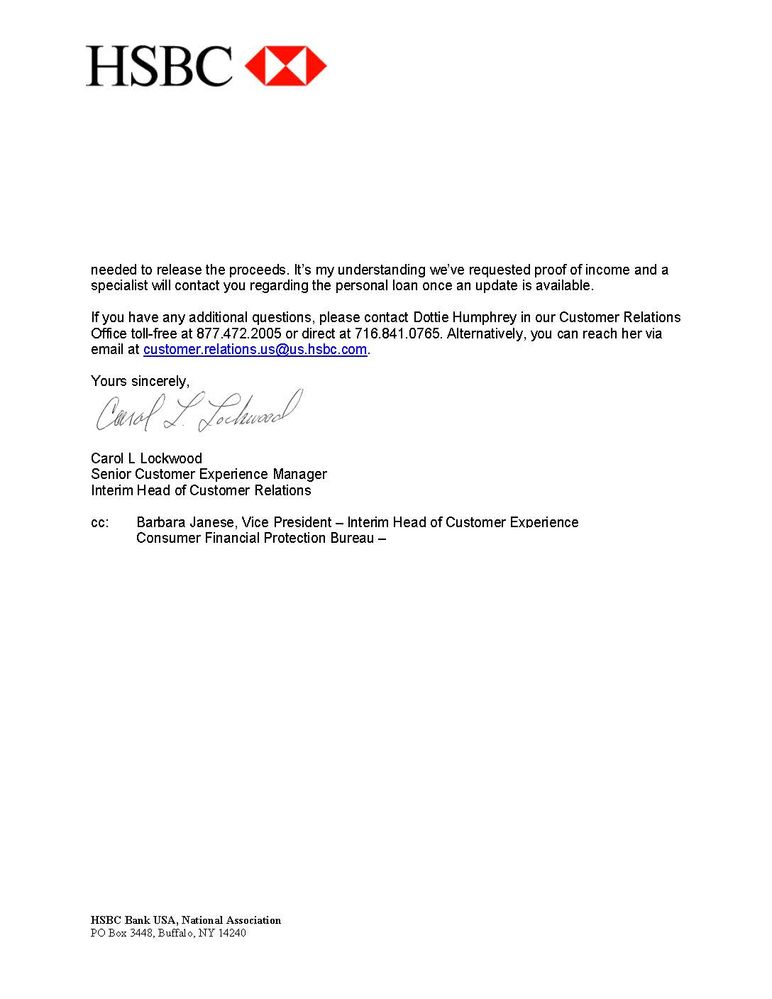 Wow, I would be canceling my accounts quickly...

Yep - exactly. The only thing is that you cannot cancel your accounts until the investigation is complete and at this time they can't provide a timeframe as to when it will be completed. It looks like consumers in the UK are experiencing the same issues with HSBC, too. More here.

Thanks for sharing this information. People definitely need to be aware of this. I was considering getting the HSBC Premier checking because they have a $600 signup bonus going, but I can't risk tieing up most of my income with a bank that acts like this. I am certain you just saved me a lot of trouble.

Thank you for mentioning that. I will update the main topic as I forgot to mention the $600 or $750 bonus payout. I fell for the bonus trap, as well. There are multiple reports on Facebook and complaints filed through CFPB regarding this bonus not being paid out to consumers. See more CFPB Bonus Complaint Facebook and many more. If you do your search on CFPB's database you can find out more about this bonus trap. I seriously cannot believe this is happening...

@Darinox  I'm sorry you're having to deal with this, it's quite unfortunate.

I strongly suggest you try working with them to resolve this issue, then move on.

You opening this account was an emotional decision, since it was opened because Chase wouldn't give you an increase, and that was enough for you to move accounts to HSBC.

You were told that they aren't exactly the easiest one to deal with (for some, not all), so no matter what you do in the future, don't make any more angry, rushed decisions. They typically don't work out.

Good luck and I hope you regain control of your accounts quickly.

When someone asks you *What's wrong*, and you're not sure if you want to start listing it in alphabetical or in order of importance.
Message 6 of 39
9 Kudos
Reply

Thanks for the feedback and kind words. I appreciate it.

The decision to move from Chase to HSBC was mostly for the lucrative credit lines and APR they give but apparently everything happens for a reason and this is the case with HSBC. Other then that, they are not responding to any of my calls/voicemails or follow-up emails and of course that was after I provided the all of the required income documentation they had requested on October 5, 2020. I was able to get the direct number of the person in charge of the investigation in Buffalo, NY apparently for no reason as he does not answer his call and/or follows back on voicemails.

Have you filed a complaint with CFPB yet?

When someone asks you *What's wrong*, and you're not sure if you want to start listing it in alphabetical or in order of importance.
Message 8 of 39
7 Kudos
Reply

I have heard stories about them and how they would freeze funds and would say I probably wouldve said "would never happen to me" but Im glad I decided not to do business with them but this is also a reason why I have more than one checking account at different banks because if one get tied up for whatever reason atleast I have funds to fall on until things are resolved, but what they are doing is just not good at all. I would file a complaint and also contact an attorney about this and once your money is released to move it either back to chase or to a new bank where they wont be doing all of this. For me I use a credit union as my primary and a brokerage as my secondary.

I agree about having multiple checking accounts. I currently have quite a few:

the only one of these even trying to charge a fee is Chase, but I send them $500 a month to avoid it. I'm using DCU as my primary account right now.

Message 10 of 39
2 Kudos
Reply
† Advertiser Disclosure: The offers that appear on this site are from third party advertisers from whom FICO receives compensation.