My self loan has officially been paid off and it came with a lovely 10+ point drop across the board. Due to my not so pleasant relationship with Navy Fed, I've had to look elsewhere for an SSL and I believe I've chosen a credit union that gives Navy's SSL a run for its money.

Security Service Credit Union has been talked about here before but it was often not an option for some because of the (at the time) pretty heavy georestricted membership requirements. Luckily, it appears they have expanded their membership eligibility to the following states: 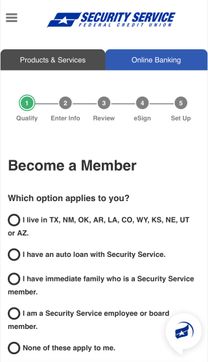 My experience with setting up an account was not smooth though. I had an issue trying to set up my account online and had to call in. After calling in, I was told multiple times that my state is not an eligible state for me to become a member. I had to speak to two people until one of them finally checked online and verified their own website lists my state as making me eligible. (Maybe their staff isn't aware of the change?)

Obviously, this is not the reason I say their SSL, in my opinion, is extremely competitive with Navy's. The reason is that the minimum amount needed for a 5-year term is only $250. Yes, $250... I had to make sure I heard the rep correct and he confirmed.

For comparison, Navy requires at least $3,000 for a 60 month term (according to posts I've seen here) as opposed to just $250 for Security Service.

Combined with their membership requirements expanding past just 3 states and the minimum requirement for a 60 month SSL only being $250, I think it's fair to say that Security Service deserves more attention than it currently has.

I hope this info is helpful to anyone who needs an SSL they can pay down to 8.9% without the matuarity date changing but can't get in with Navy Fed!

Interesting to know . Thanks for the heads up 👍

I received a call from Security Service Credit Union today congratulating me on my SSL being approved but with the condition of it only being at a term of 12 months.

It appears the rep I spoke with was misinformed and that the actual amount needed for a 60 month term is $4,000.

I hope this info is helpful to anyone who needs an SSL they can pay down to 8.9% without the matuarity date changing but can't get in with Navy Fed!

Besides the last line in your post, you never mentioned if you can pay off 89% of the loan and retain your full maturity date. Was this also confirmed with the rep?

Actually, yes. Since the first rep appeared to be misinformed about the ammount needed for a 60 month term, I made sure to verify that the maturity date will not change if a large payment was made and he confirmed.

He even went so far as to give me instructions of how to pay online when the loan starts to ensure the maturity date does not change and  that the next payment gets pushed back.

This is definitely still a Credit Union that works with the SSL technique.

Unfortunately, no funds were unfrozen. The entire $10,000 amount is still being held in the savings account even though $9,110 was paid off on the loan.

I was thinking about calling in but I don't want to risk them taking action on the loan because I used this method.

Does anyone have experience with SSFCU and their SSLs?

Calling them is the easiest solution

If I call in, what are the odds they terminate the loan due to the SSL technique being used here?

Calling them is the easiest solution

Its so simple to call them and get THE HARD FACTS.

I guess all of the advice to not make the FI aware you're utilizing the SSL technique was not important. Got it.

Message 10 of 13
0 Kudos
Reply
† Advertiser Disclosure: The offers that appear on this site are from third party advertisers from whom FICO receives compensation.