I honestly tried but didn't work for me, however my coworker does it and they will run a bonus every now and then too and you get extra money. She makes a few hundred a month

I apparently have "horrible veins" I went 5 times and nobody could get me, they did pay me 50.00 for my troubles, I really wanted to do it to help people and to make some extra cash.

Wish I was there. I dont miss. The trick is using a BP cuff. That backs up everything. And they will pop up.

I wish you were there too, I know I have veins you just have to do it properly, I used to do phlebotomy, and I loved it

The OP appears to live in Wisconsin and with the current economy there's no reason they can't pay off a $2,500 debt unless they are either physically incapable of working or choose not to pay it.  They could get a part-time job at Amazon (no interview or resume required) that pays $16 per hour and has four hour shifts any time of day; another company Uline pays $18 per hour, Roundy's starts at $19.15 per hour part-time.  But that debt can be knocked off in two months of part-time work if they put their mind to it, and if capable of picking up a part-time gig.

To put the point down directly regarding the lack of approvals:

Because with all the derogatories you have on your reports, including $10,000 in charged off and unresolved debt, and the utilization on that card being over 100%, no one wants to take a chance on you. You have to clean things up first. BTs are a credit perk that lenders offer to consumers who have demonstrated responsible account management.

A bank doesn’t want to see all the derogs and 5-figure chargeoffs, and then extend you a line of credit to immediately dump thousands of dollars of debt onto, when its debt you owed someone else and couldn’t pay.

Once you get that card out of maxed out territory, which means under 88.9% utilization, you need to pay it and the other cards off completely - as suggested, do OT at work, pick up a second job, something - and then you definitely DO need to worry about paying off that $10k in chargeoffs. Without knowing which lender(s) were burned, I’m just taking a stab here, but there’s a good chance you could end up being sued and garnished for those. If it was $150, I wouldn’t sweat, but for ten grand, I’d think sooner or later someone’s gonna want their money.

Best bet for now is focus on paying off what you owe. Pay it off, don’t try finding ways to transfer it, or open more lines of credit to play reindeer games with the debt. Cancel cable, get a cheap cell plan, skip Dunkin’, and throw everything you can at these debts before they become a legal problem and things get really out of control.

OP,
You have gotten excellent advice from the usual suspects. I was in your shoes last year but my debt was over $100k. Today it sits at just under $20k.

I sold my cars, bikes, cancelled cable, switched to T-mobile, cancelled Prime, stopped eating out, started cooking at home and everything was budgeted out.

The drop in APR will help but will not solve your problems. I took my APRs from 22% to 1.9% by adding myself as AUs of a friends card and BT the balances back to my account but I had offers available. This was done about 4 months after I started knocking my accounts down.

I have denials in my credit from Oct as I tried to do everything you are doing now. Deal with what you have now and once you have brought that balance down to acceptable Ut you can focus on new accounts with BT offers.

Right now at $2500 you are looking at maybe $500 a year in interest rates. Even if you pay $200 a month on this account you can most likely knock it out very quick.

If you share a bit about your income and your fixed expenses I’m sure You’ll Get sound advice how to get out of this.

My signature is only for inspiration.

I agree with @ImTheDevil  Not sure of the age on those 10K chargeoffs, but you very well may have to worry about them. If they are withim the SOL , you could very well be looking at legal issues and garnishment which is not a pretty thing.

Go over your budget expenses and see where you can cut, try to figure out how to make some extra income and start tackling these debts. Given your current situation no lender is gonna give you anything right now. That Avenue will not work.

The gig economy can really help you out. As long as you have a functioning car, you can make money. The food delivery jobs (Uber Eats, GrubHub, DoorDash) are fast money and the schedule is extremely flexible. Easy to schedule around any job.

I'm doing the same, have items for sale on Letgo, Craigslist, Poshmark. Sold one of my older vehicles. Joined Gigwalk, got a side job with Shipt and love it actually. I'm almost debt free not including the student loans which I will take care of next year, but paying on time. Just have to grind!

Gigwalk is a pretty cool app similar to mystery shop,  that pays you for super simple jobs like taking photos of products. For example I was paid $40 to go to 2 Walmarts and take photos of their candy display,  took 15 min total at each store and they were only two miles apart. One other gig was to go to a eye glass shop and ask questions and rate the behavior of the agent and answer like 10 questions about the experience and it paid $15
Shipt is amazing,  love it,  super flexible,  no upfront cost for me,  they provide the credit card to shop and provide the uniform and shopping bags. But you will need to buy more and better quality ones. The money is great if you are in the right market. I will post some pics that I hope is OK,  not sure if it breaks any rules,  I have blocked out a lot of Info. Its just so you can see a real example of the type of pay. It gets better as you get more experienced. You are basically someone's personal shopper and not just for groceries all the time. Its pretty fun and I get my own shopping done at the same time. You can earn bonuses for giving out coupons which I make an extra $150-200 a month doing. Also you can easily do 40 shops in 3-4 days time, just to give a frame of reference to pics below.

can be done easily in 3-4 days time 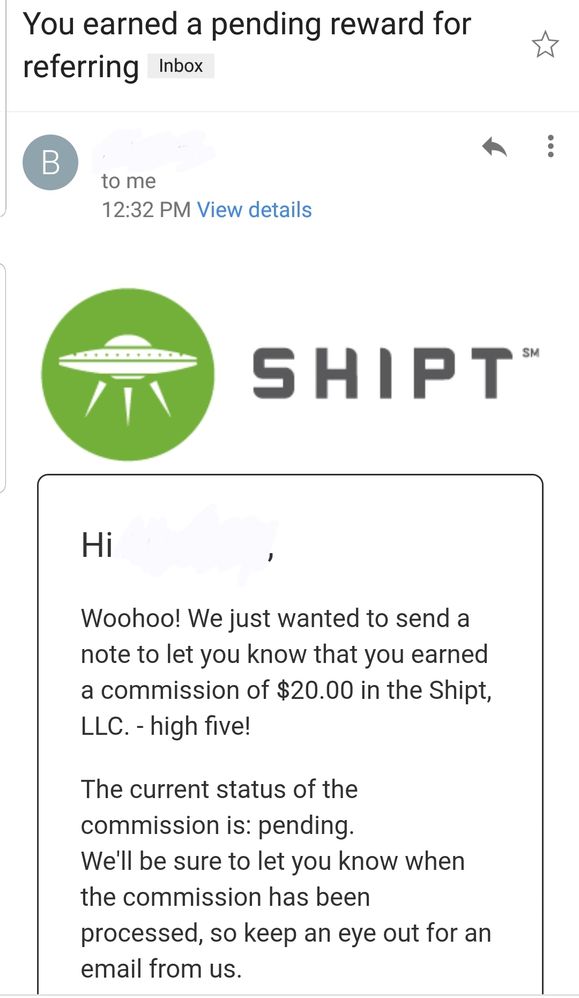 bonuses for giving out coupon codes

Gigwalk is a pretty cool app similar to mystery shop,  that pays you for super simple jobs like taking photos of products.
Shipt is amazing,  love it,  super flexible,  no upfront cost for me,   You are basically someone's personal shopper

Interesting, I had never heard of either of these.   I see the pay but have you worked out an hourly pay for either of these, on average?  And factored in gas costs for running around, etc?  I know it probably varies but it looks like you've been doing it long enough to provide a pretty fair estimate.  I'm not looking for a side gig but it's nice to know these are out there.  However, I know some of these side-gigs could  end up paying less than minimum wage if you're not careful, so maybe not even worth the effort as opposed to just a part-time job.