Question about Capital One and Discover lates

Question about Capital One and Discover lates

I have a question about some lates appearing on my reports. I understand that I have a "negative account" with both Capital One and Discover, but how are those accounts affecting my scores? Is it applying as one negative tradeline, meaning I have 1 late with Capital One and 1 late with Discover or is each 30, 60, 90, etc. counted as a "late payment"?

Here are some photos for reference: (Capital One - up / Discover - down) 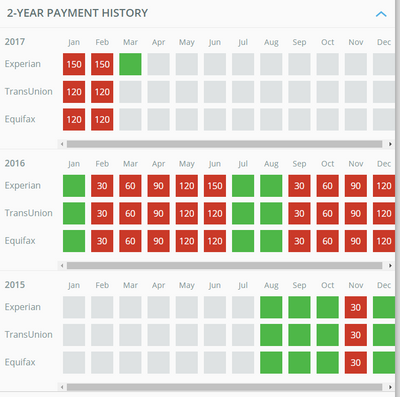 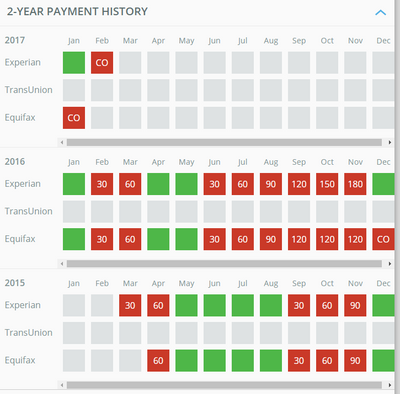 What can I do to have these removed from my report?

Unfortunately they are there to stay for 7 yrs and list as a charge off. Someone may pop in soon. I think, not sure. When lates are grouped like they are. They all come off as a group. But I cant remember exactly how it works. Robert EG or someone else will know. Wish I had better insight. But lates that long are killers to your score for the long run. Sorry.

My posts are JMHO. My siggy is not to brag at all. Just sharing my experiences after learning here from rebuild to recovery after BK DC @ 540's. And to show fellow members what can be accomplished when you do it right and play the FICO Credit Game.
Message 2 of 5
0 Kudos
Highlighted

Each chain begins with its own initial date of first delinquency, and continues until the account is later paid back into good standing.

All monthly delinquencies in a common chain will be excluded by the CRA no later than 7 years from the date of initial delinquency of that common chain.

If a CO is reported, the exclusion is slightly different.  The reporting of the CO becomes excluded no later than 7 years plus 180 days from the date of first delinquency.  However, the CRAs will normally exclude at 7 years from the DOFD, which essentially treats the reported CO the same as a monthly delinquency exclusion.

To obtain removal earlier than the exclusion date, you must obtain a good-will deletion reported by the creditor.

Creditors are normally reluctant to grant deletion of accurate information, but give it a go.......

Is there any real way to know how low it will keep my scores? Are 700s even attainable with something like that reporting?

Well I have the worst baddie anyone can have. A BK. Keep paying your bills on time as these lates age. If you dont have an intallment loan. Self lender may help. Time is your best friend for now. For rebuilding. I took the Debit card route. I had no cards for almost 10yrs by choice. Cut them all up. Since BK I treat my cards like a debit card. If I dont have the money. I dont charge it. If I want something, save for it, use the card for the cash back and pay it off. If something serious happens to me. I have enough credit to handle that emergency. Time flies by. It will be a distant memory in time. Best of luck!

As for 700. Your accounts will age and the lates will age too. May be slow go but in time it can't go anywhere but up now. And no more lates.

My posts are JMHO. My siggy is not to brag at all. Just sharing my experiences after learning here from rebuild to recovery after BK DC @ 540's. And to show fellow members what can be accomplished when you do it right and play the FICO Credit Game.
Message 5 of 5
0 Kudos
† Advertiser Disclosure: The offers that appear on this site are from third party advertisers from whom FICO receives compensation.