Be Honest, When Does Your "AGE" Starts To Factor Into Your Credit Score?

Does a person's age effect FICO? The lenght of the credit history has some significance, no?

There really is no credit game. Pay as agreed and the person should be good. Maybe I'm not reading the question correctly. If the question is what magic number does a person lose their marbles and can not manage finances there is no specific age. Dementia is not a given.

A senior may want to estabish credit for many reasons. There is a convenience to not carrying cash. Debit cards lack the protections of credit cards. ATM's are not always the safest place to be. Now, in this area at least, bank lobbys are closed. Good luck getting any useful amount of cash.

The people referenced in the original post are debt free and pay as they go for goods and services. They have steady income. The only way to learn if credit will be granted is to apply.

The question of when do people lost their wits comes up frequently regarding many subjects not credit and finance exclusively. Anthony Fauci will be 80 years old on Christmas eve. I certainly would not try to match wits with Dr. Fauci. Maybe some here would and could.

Last week I was getting a haircut. The stylist commented that your generation has progress to wahtever she was babling about. I had no comment but smiled as I refrained from telling her we put that little computer in her pocket. That gizzy she needs to find her way home every day. Her demo has Zuck.

She does a great haircut. She's talented and personable. The your generation comments are just part of the lexicon now. Something to bring a smile and dismiss.

Why not have them pull their credit reports? Since some are homeowners, purchased cars, have cable, cell phones, other utilities, and probably had a Sears card at one point, their situation may not be that bleak. Good luck!

I've been in the midst of my rebuild for two years now, and I have older relatives, who are also interested in building their credit, with many having no credit outside of an aunt here or there who co-signed everything from furniture to a new car for one or two of their children, luckily everything was paid off completely and on time, without missing a payment

Now, some of my family are retired, either getting retirement, disability or SSI, in some cases  all three. Most of them, already own their homes, cars and trucks. I have an uncle in particular, whose favorite saying is, "I worked long enough to deserve the right to wake up and walk to the mailbox."

Anyway, they see me, a 49-year-old rebuilding my credit, while expressing to them, the benefit of using credit compared to cash/debit, especially when it comes to cash back.

So, several of them have asked me to show them the credit game.

All of their kids are grown, and the few bills they have consist of utilities, cable, internet and groceries.

They've all allowed me to purchase their expenses on my cash back credit cards and more, but, I'm not certain, if i would honestly want to get five to eight seniors invovled in credit.

What are my options?

Should i simply chalk this down as jaw-jacking or should I seriously consider getting them involved with the sharks?

Don't get me wrong, each of them still have more than enough wits to manage, especially with several sitting home and ordering stuff off of TV and in catalogs on a weekly basis.

Again, I'm 49-years-old and my aunt bought me a pajamas set, just because she saw the commercial and thought that would look good on me.  Keep in mind, she didn't tell me until after FedEx delivered it, as she knew, i would have called and canceled the order.

Anyway, thanks for sufering through my novel, but to focus on the question at hand:

Is one ever too old for credit?

It's not that they're too old. It's just that if they want to do it they need to do it independently of you.

If they want to get involved in credit, they need to handle their own stuff. IMHO you can share your knowledge with them, sure, but I wouldn't try to push them.

I personally regret the day I ever got involved in credit.

PS I think your headline doesn't fit your post. Obviously a person's age doesn't factor into his or her credit score, no more than one's race or religion do.

PPS I think this post should be in the "relationships" section.

For someone that regrets it, you sure have quite a showing 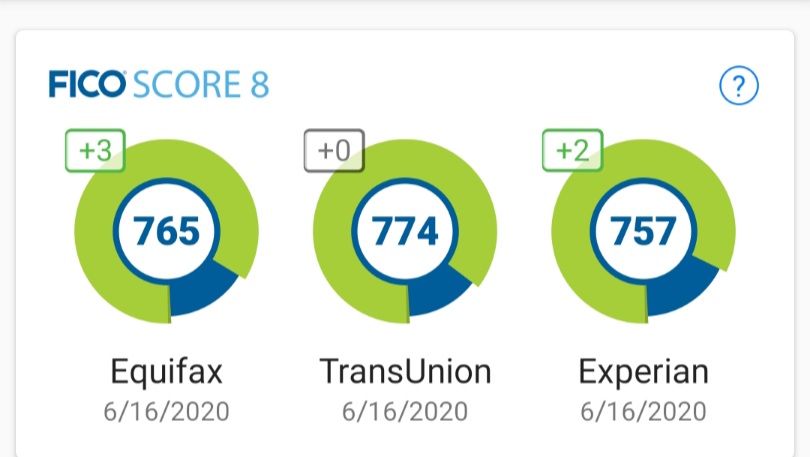 ...I'm curious why you regret ever having gotten into the credit game @SouthJamaica

Because I hate owing money. The whole thing is a big trap for suckers and I, regretfully, took the bait.

...I'm curious why you regret ever having gotten into the credit game @SouthJamaica

Because I hate owing money. The whole thing is a big trap for suckers and I, regretfully, took the bait.

Take the myFICO Fitness Challenge
Message 15 of 15
0 Kudos
Reply
† Advertiser Disclosure: The offers that appear on this site are from third party advertisers from whom FICO receives compensation.