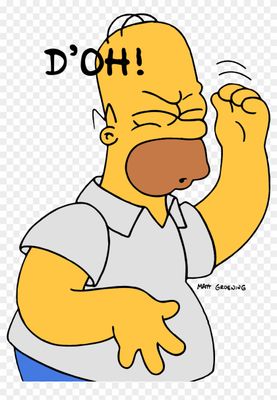 Okay myFICOers, confession time.  Tell us about a time since you've joined the forums that you did something that was positively stupid with your credit, that you should have asked about or searched for before doing it.  Whether it's going for that card that anybody registered for more than 2 days could have told you that you'd be denied for or that signup bonus that you were ineligible for, everybody's got a skeleton in their credit closet (which is really just a big sock drawer).

And then there's the rookie mistakes...  I didn't understand how easy it was to do product changes with Chase.  I had two Chase cards from 2005 and 2007.  No idea what cards they were originally, but over time Chase turned them into a Slate and a Freedom.  Since the Slate was useless, I called Chase up, closed it, and moved the credit line to the Freedom.  In the grand scheme of things, it wasn't disastrous or anything, but had I known then what I know now, I would have moved the Freedom's limit to the Slate card and then done a product change (just not on the same call, but that's another story) so I could keep the 2005 open date rather than the 2007.  One can never have too much AAoA padding!

And speaking of AAoA padding and rookie mistakes, when I first found myFICO I had four Capital One cards.  Two opened in 2001 that were always CapOne cards (one of those I combined with another card opened in the 90s sometime around 2002) and two that were cards acquired from other lenders, one opened in 2001 and the other in 2005.  Since CapOne let you combine cards right on their website at the time, I started merging the cards I didn't have much use for, and of course I merged them all onto the acquired card that had the biggest limit - which, you guessed it, is the one from 2005 and not any of the three from 2001.  Within minutes I had one single CapOne card, went straight to the upgrade page and turned that baby into a FrankenVentureOne World MasterCard!  In hindsight, this was problematic.  See, long before discovering myFICO, I had closed all of the credit cards I opened in the 90s and they've fallen off of my reports over the years.  While I have some AU cards that are older, that left my 2002 Amex Blue as my oldest primary account that was still open (my Amex Gold, Amex Platinum, and Target card are also circa 2002).  After running a bunch of spend and trying to force a CLI (which I had never received from CapOne in like 20 years) to no avail, I finally ended up closing that card anyway.  But the end result of that merge was that even after finding myFICO, I managed to close my oldest open account 3 times in one day.  D'oh!

My credit journey began when I wanted/needed to get out of debt.  I had high UTL on every card.  Except 1.  A store card I didn't even know was still open until I pulled my credit report report.  Had not used it in several years so I assumed it was closed and off my report because it had been over 7 years (with several lates I'm sure).  But there it was, clean as can be with a $100 credit limit.

By this time I'd learned CLI would help reduce UTL.  Didn't want any new accounts or the HP's that came along with it.  So due to the age and the clean account I wanted to make sure it wasn't going to be closed.  I really appreciated that $100 dollars padding my UTL but new my score was GOOD by now and thought I'd ask for a replacement card and a CLI.  What I did not know at the time is that it would be a HP.   I vaguely recall her asking if it was okay to check my credit.  I might have been a little cocky because this was the first time I was able to say YES without saying a prayer.  Got my increase (1K), but a HP and at that time I had none.  No new accounts for over 8 years.

Now after trying to get every little point I could get which I thought the CLI would really help as it took my AGG below a threshold, the HP dinged me 8pts.  That reported before the CLI increase (an subsequent decreases on other cards) so I was hit for 8pts and with the CLI that came later, netted minus 2pts.  Today I could care less about losing this amount of points but I felt stupid because I was using my 'new knowledge'  to work the system

I don't really have anything that would rank in the "positively stupid" category. The dumbest thing I did was app for all the cards I wanted and got myself so far past 5/24, there is no Chase in my future until 9/2021 at the earliest. Not really a big deal unless Synchrony shuts down my Amazon card on me. Then life will hurt for awhile.

I am fortunate that I didn't get seriously burned with my risky behavior and I know that. Every denial I got was more or less expected (PenFed, Commerce Bank, Citi, Barclays, US Bank, Alliant, Langley) but there were more approvals than declines and some of them like DCU were actually not even expected. No lenders have CLD'd me or closed any cards on me so no regerts as of now.

... OH WAIT! When I tried to get EE from EX and they sent a dispute to Ford. THAT was really stupid!

This happened long before I joined myFICO, but I opened a store card in 1998. It was a convenience store chain, Kwik Trip, that was based very near where I lived at the time, and the benefits were very, very good. In 2010 I moved to the East Coast, so I closed the card.

My credit reports show my oldest account at 22 years, which is this credit line. In a few months it will be 10 years since I closed it. I wish that I would have kept it open. Before I moved outside the US, I would visit my home area at least once a year, often twice a year, because I have family there. I could have probably used the card enough to keep it open. I wonder what will happen to my credit score when it drops off. I think my next oldest open account is currently 11 years.

I was even thinking about calling them and seeing if it would be possible to reopen the same account. I have no idea if that is even possible, or if they would do it if my US address is 1,000 miles away.

If the above is the worst mistake I've made, I guess it isn't too bad...

I mean, it did kind of make sense at the time to close it.

My biggest D'oh was a major app spree in April 2019.  I had been a member of the boards juuuuust long enough to start applying some of the great info here and see modest score increases.  What I had not done was the deep dive into understanding FICO scoring and some of the consequences of my actions nor had I researched cards to know what was best for me.  I just wanted approvals.  I was approved for 7 cards in a 2 week period.  At the end of this spree I was approved for the only "Goal" card in this bunch, my Chase SW Visa.  I have no idea how that got approved, because even with some of the earlier approvals not reporting, I was still LOL/24 based on subprime cards I had opened the year prior to coming to the boards.  I spent several months in AA purgatory waiting for Chase to shut me down (they didn't).  Now, I am the proud owner of a group of redundant cards that live in my desk/sock drawer. I've become much more selective now, and have a decent understanding of what cards fit my spend, but that April spree seriously put a dent in my AAoA.  Never let it be said that I do things the easy way.

I opened a bunch of cards instead of paying off my chargeoffs and collections.

Not having an app plan. There are way too many of my cards that are redundant, not useful at all, or were just a churn. Oh also being honest with myself. I travel enough for one or two big travel cards (now Aspire and Platinum) but I really can't make up the Citi Prestige, Delta Platinum, Surpass, or Amex Green.

I went on a slow spree last year April through October just for SUBs, because I wanted to feel good with an approval, or other dumb reasons like lying to myself. Luckily nothing too hurtful happened but because of doing it so often I'm now stuck out of Chase, BofA, and Barclays for a good while.

That is the funniest thing today, I need a good laugh and don't we all live and learn and then learn again!!

Right after joining the forum, I read about the Chase trifecta and noticed a few green checkmarks in my Chase checking account, so I decided to go for it, even though I had no idea of the risks involved with applying for a bunch of Chase cards all at once, especially with sub-par low-600's credit, and especially with a recent Chase chargeoff (along with SEVEN other chargeoffs) I'd only just paid off a couple months earlier. Applied for CSP, got it. Applied for CFU, got it. After those two apps, the green checkmark for CF disappeared, so I stopped just short of applying for that one too... all in the same day.

Only after that did I start reading about all the horror stories. The next 30 days were probably the most stressful days of my adult life

Logged in every 15 minutes to check if they'd closed all my accounts yet.

I got VERY lucky, and in hindsight I don't regret it, but that doesn't mean it wasn't completely stupid for me to go about doing all that without all the information. I definitely should not have done what I did, and just straight up got stupid lucky. Maybe the underwriter fell asleep on his keyboard that day.

United 1K - 675,000 lifetime flight miles    |    Chase Status: 3/24
Message 10 of 13
† Advertiser Disclosure: The offers that appear on this site are from third party advertisers from whom FICO receives compensation.