Thank you for your reply.

A conversation was had with a tax professional.

My goal is to be approved in the future for better cards with higher limits (have and not need situation) but I was hesitant about using an inquiry if the $300 secured with US bank would be considered laughable to future lenders considering all my limits are low.

A tax professional? Well, they obviously are well-versed in taxes...not sure about credit. Honestly, existing credit limits aren't nearly as big a deal as some seem to think. Sure other future lenders *may* use them for some sort of reference to determine what limit to give you themselves, but honestly, limits really come down to what the bank is comfortable with assigning you, DTI, total debt amounts, income, etc. In other words, existing limits, whether large or small, bear little to no effect on future credit apps/limits.

Everyone has to start somewhere, and large limits don't typically happen right out of the gate. Us here at MF are outliers, in that out in the "real" world with your average consumer, limits are usually probably fairly modest and the average consumer doesn't really care what their limit is on a single card, or the average limit across all cards, nor do they care what their total credit limits are.

I applied for the US Bank secured card but it appears there were 2 inquiries instead of 1. Is this normal or will it affect my score. 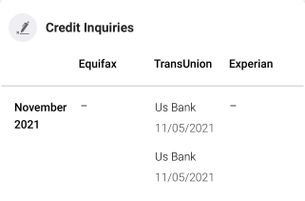 I applied for the US Bank secured card but it appears there were 2 inquiries instead of 1. Is this normal or will it affect my score.

BTW, were you approved for the card? If so, have you been practicing AZEO? How is is working out for you?

OP, from your Discover card statements, do they tell you what your FICO score is? If so, could you let us know?

Depending on your score, it may not be required to keep pursuing secured cards.

My apologies for the delay.

I've been to scared to report a $0 statement balance because I heard it will drop score.

My score dropped 35 points due to high utilization being reported. (I sent Capital One a letter asking them to report my payment activity for Oct. and when they did is was off cycle)

For this reason I have a 620 score currently, and scared to implement AZEO now due to a possible score drop.

Hello my current is 620 on Discover I haven't applied for anymore cards.

Hello my current is 620 on Discover I haven't applied for anymore cards.

Are these your first ever credit cards? Any other credit history? The 620 seems low if these are the only two cards.

For this reason I have a 620 score currently, and scared to implement AZEO now due to a possible score drop.

No reason to be scared.  Utilization does not have a memory.  Within 30-60 days you will be at least back to where you were and hopefully higher.

Message 28 of 28
0 Kudos
Reply
† Advertiser Disclosure: The offers that appear on this site are from third party advertisers from whom FICO receives compensation.