No, this is not how it works. Each FICO version has its own secret formula, that no one really knows and there is no way to convert one score to another with a simple process like the one you suggested.

I found an interesting document on VantageScore 3 (what the CK FAKO scores report).

There's a lot of information that will take some time, and possibly a mind more familiar with lending risk management, to understand, but the thing that stood out to me the most was the following statement:

"Plus, the VantageScore 3.0 model can generate scores for 30-35
million previously “unscoreable” consumers because it considers all
of a consumer’s credit history rather the most immediate 24 months."

That would completely explain why my FAKOs are so much worse than my FICOs.  All of my derogs are way in the past, mostly in the 4-7 year range.  Apparently FICO is scoring me more kindly on these things, and the VantageScore is penalizing me more harshly for them.

CK is a joke! I have seen it go BOTh ways.

Currently my CK scores are:

MyFico scores as of right now are:

Ok, I do realize that the score is "for educational purposes only", and is not a TRUE score. But, still.. a 107 point difference on TU?

Should I conclude Fico 04 is bad? No - but I don't like how the model treats me when I use all my cards.

It is worth noting that VantageScore is not trying to mimic Fico 08 or any other credit scoring model. The majority of credit scoring models were developed to help creditors. The intent of the models is to show a stronger correlation between credit risk and the model's assigned score than competing models and to be capable of scoring a greater % of the population. Consumers really have no voice in this

* Includes unauthorized HP from PenFed on EQ report that was removed in January (inq had a 2 point impact on score).

More, from the same article. The percentages that specific behaviors affect VantageScore 3 scores (aka CK and FAKO) vs FICO 8. 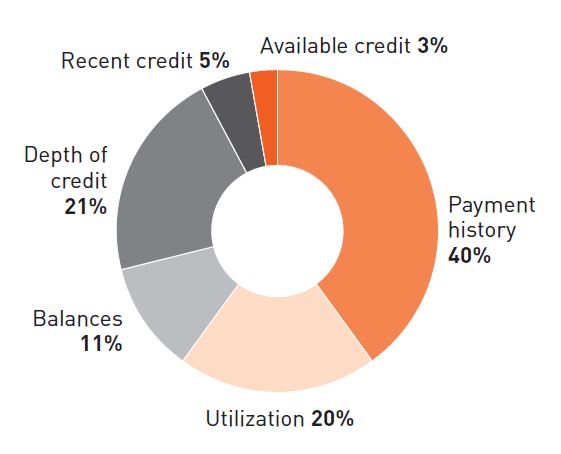 Whereas FICO 8, according to MyFICO, uses the following weights/percentages:

So the hard work I did before going into the garden, building a stronger and bigger credit profile, tripling the amount of available credit while reducing utilization, counted for a lot in FICO8 land, but doesn't help me nearly as much in VantageScore3.  Basically, nothing but time will improve my VantageScore 3.0. Time passing, paying everything on time, and letting the bad stuff become just bits in the noise pattern of a larger pattern of good stuff.

MyFico scores are lower than my Credit Karma, now I'm nervous. This is a bit discouraging!! What am I doing wrong?
Message 97 of 338
0 Kudos

Recently applied and was approved for Chase SP and Amex BCE. I was relying on CK's vantage scores but before I pulled the trigger on the apps I wanted to get my real FICO scores. CK had me at 721 TU and 735 EQ but when I checked MyFico I came in at EQ 774, TU 778, and EX 785. I'd rather my FAKO be lower anyway but the actual jump was quite surprising. Using CK for free monitoring is fine but if I was in different scoring ranges or I was about to app for a mortgage or car loan I would absolutely have to know the real thing.
Message 98 of 338
1 Kudo

My Credit Karma score just went from 760 to 812 last Monday. My FICO score (Free from Discover/Barclays) went from 819 to 803. I think it's because my credit card balances went from $200 to $0 for the FICO drop. I think the vantage increase happened because my two year old inquiries for a mortgage (4 of them within a week) all dropped off. It's stupid if that's what causes a 52 point increase. I guess you get what you pay for.

Really a score is just a general gauge of where your credit stands whether it is a FICO score or a FAKO score.. Granted lender sometimes will solely go off a FICO score for approval or lack of an approval. I think what alot of people tend to overlook is it isn't the score that is really important it is what is your your CREDIT REPORT for each CB.  People can be well into the 700's and have baddies or BK's or what not and be declined due to those reasons.  I think it is the overall report lenders look at rather than just the score and look at the complete picture.  Ya it is nice seeing a high score, but I look more at what is in my credit report or others reports as I find that more important than a Fico or Fako score.

This is so true! Couldn't have said it better. I speak from experience that it's important to know what is in your CR's from each CB.

I could go into my journey with my credit but this post would be too long. However I will say I was not educated in the area of my credit reports and scores until probably the last 10 years. I'm 45. Unfortunately right out of high school I was given about 4 or 5 CC's that I maxed out by the time I was 25, probably about 30k in debt. During that time I did manage to get a used car loan. Never looked at scores yet alone a CR. I only earned about 15k. I got a another job to help pay down the debts. Somehow I managed to get some of it down.

Spin forward to about 27 I got a good paying job making 10k more than what I was previously earning. Unfortunately I was already up to my ears in debt. At this point I met someone and got married. Turned out to be a horrible decision and we divorced. She screwed my credit in a couple ways but didn't know about it. My bills mounted and I couldn't get out of debt even with contacting credit company for assistance. So I filed for a BK.

At this point my scores were probably somewhere south of 600. About 6 months later I started receiving credit card offers. So I got a couple CC's. Keep in mind I really wasn't educated in credit even up to this point. I'd say about 6 months later I actually pulled and looked at a CR. I was sort of shocked. I knew it was bad. With a BK I thought I was still south of 600. To my surprise I was a little over 600. I guess with a couple cards getting my feet wet again helped. I hadn't missed any payments and only 1 card had a small balance. I didn't even realize I was doing what I should have been doing all along.

I'd say maybe a year later I realized by more CR's that my ex had screwed me by allowing the vehicle I co-signed get REPO. I was livid. Either I didn't see it before or it didn't show up right away but there it was. She had also used checks from an account that was closed. Needless to say these bounced and were on my report because my name was on the account.

So not only did I still have the BK but now I had a handful of derog and neg items. That's when I found this web site and the forums. I joined and tried to educate myself with as much information as I could about everything. Wow was I way so uneducated up to that point.

I did get a couple things fixed on my CR's but a couple things were still there and had to fall off. Yes I made good on paying those bad checks and even the repossessed vehicle. I decided I wanted to change my life by correcting the mistakes I made with my credit. Just as a reference point my scores went from about 620 up to about 680-700 with fixing a few things on my CR. I couldn't believe how much the scores improved by fixing a few things.

I did get married again, even bought a house together and eventually we got a divorce but she didn't screw my credit. My scores when we got the house were around 725. Fortunately I pay attention to everything now on my credit. I still have 1 thing that hasn't fallen off but hoping that goes next year.

Through all of it my scores probably went from the 500's to now they are 770. My goal is 800+ and my FAKO's on CK actually are there. Reality is my FICO scores are not. I have found them to be about 30-50 points less than my FAKO. Just got 2 new cards and those pulled all 3 CB. The FICO's were about 770. From where I came from I'm great with that but I keep wanting to push to that 800 club officially. The bottom line is knowing what is in your reports are much more important imho than the scores themselves.

Message 100 of 338
1 Kudo
† Advertiser Disclosure: The offers that appear on this site are from third party advertisers from whom FICO receives compensation.