Last week I was going to post a whiny topic “Trans Union Hates Me”, due to a 1 point loss for some unknown reason while the other CRA were going up. Decided not to post. TU has always been my lowest……until today!

Received an alert TU score changed. 790 to 840.  The only 2 things possible (I guess I'll find out when I received my quarterly 3B report later this week) is that they provided an EE for my lone baddie (30D from Dec 12 on closed acct). I didn’t request it. OR; 1 of the 3 inquiries reaching 1 year on 1/5/19.  Neither of which I'd expect to yield such an increase.  Am I wrong?

My assumption is its an EE due to the score factor change below.

Util stays under 5%, individual and aggregate. No other aging items I’m aware of that could impact me with AAoA at 11y5m, AoYA at 5m and AoOA at 22y10m. My AAoA may actually drop a few months if an EE was given and the account fell off. 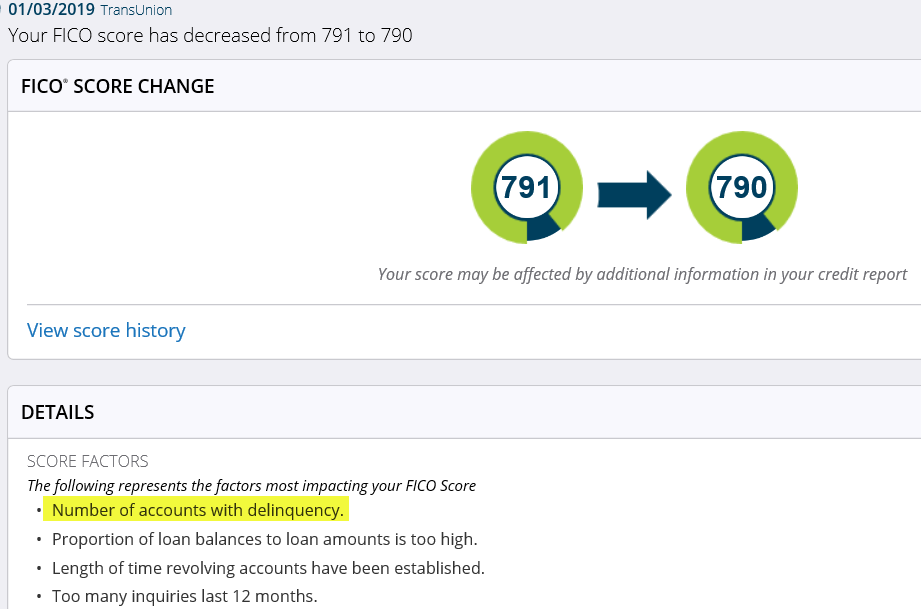 This last friday TU also removed my 120+ late from my SL my TU score jumped from 731 -> 800+... They could be doing some EE stuff as I knew it was going to fall off sometime soon, but not exactly sure when.. You might of hit the same thing as me as well as they could of possibly been doing some house cleaning.  all my lates feel off EQ about two months back and Exp is only one with the SL 120+ late remaining and expect it to follow suit shortly as it goes positive or just simply removed.

That's awesome.  Congratulations!  If I were to guess I'd say house cleaning.  I've read here that EE are considered at 1 month prior for EQ, 3 months for EX and 6 months for TU.  My EE (if that's what I got) would equal 11 months prior to the 7 year mark.

From what I've learned here I'd expect to see this type of increase for a 120D.  But one 30D?  That changes everything I thought I'd learned about the impact of a lone 30D that was as old as it was (6y1m).

Good luck with EX.  Although they have historically been my highest score, they have held on to baddies longer than EQ and TU in the past for me.

Interesting, nice datapoint showing that even a 30D late counts for the entire time it's on the file.  Unfortunate for yours truly haha, but oh well I'll live.  I'm not that surprised on it honestly, I knew a 60D absolutely counted full monty and there was a bunch of old conventional wisdom (disproven) that those didn't rate after 5 years, this is the first 30D datapoint that I'm aware of and the reason codes are explicit.

Also strange that you didn't have a New Accounts penalty in the reason codes before that: 30D lates as near as we can tell are considered in the top 8 scorecards where New Account does factor.

I lost access to many of my old reports unfortunately, guess will see if I still have the new account code whenever my recent deliquency tag goes away.

Congratulations! I've had the same experience with TU; they seem to take their time updating. But when they do, it's a whopper!

I'm hoping some of my old late payments fall off soon as well. Probably later this summer.

Oh man I love seeing posts like this. My TU has a ton of crap that’s going to be falling by September - 30,60,90,120, lates across 3 loans and a repo and paid charge off on one, all of it due to be removed in July. Should be pretty decent since my BK will be all that’s left. Posts like this get me excited. Congrats!

To add to my past, I had a 30d & 60D in Feb 12 and Mar 12 on the same closed account with EX only but I have Experian credit works or something like that that gives me 3B reports with additional score each month.  On the 12/15 TU report the 30D and 60D from Feb 12 & Mar 12 no longer appeared but I only receive a 1 pt with TU (assumed this was the reason with the Dec 12 still present).  So what was left was that sole 30D Dec 12 that seemingly caused this 50 point increase.  TU is always later reporting than the other 2 with MyFICO. I suppose it's possible the 60D removal that occured in mid Dec, which would be 6y10m prior to this increase could be part of this increase???  But I'd assume it would show on my 12/15 TU report from my Experian subscription unless it didn't report the score change until January, although it did not show the 30D and 60D on the 12/15 report.

Based on this I can only assume the lone 30D from Dec 12 is the difference.  Yet I still can't imagine this sole derog removal could cause a 50 point increase.  Posted because I need you experts to chime in

Well other than the conventional wisdom which unfortunately we have found to have many things wrong with it, what is necessarily so surprising?

The reason codes are explicit, if the 30/60 were not there in December and only the lone 30D was and you have the delinquency reason code, voila.

Honestly I had my doubts about a 30D not counting when my own data clearly showed a 60D counted the entire time it was on, but I hadn’t seen a great datapoint previously.

It might not have been the whole 50 points, could be conflated with something else but it was clearly a bunch of points and that directly contradicts the old “30D don’t count after 2 years” or whatever at least for FICO 8. Might not quite be the same for earlier, do you get the other bureau scores with that Experian product? Namely TU FICO 4 by chance? Would love to know what it did before and after.

It isn’t as if a 790 is a bad score to be clear, but it wasn’t an uber clean scorecard assignment with the 30D nearly at 7 years.

Ah well, guess I don’t have much to look forward to score wise with EQ/TU anymore, I was at a 774 with a 2 and change year old 30D on TU back on 1/1/18, doesn’t sound like that scorecard goes appreciably higher based on your data point.

Out of curiosity what does the rest of your file look like in terms of numbers of accounts and AAOA? I know you have at least one account opened presumably in the last year.

You're right.  I'm stuck on conventional wisdom and the numerous posts suggesting a lone 30D that old has little to no penalty.

My Experian subsription provides MTG, 3 Bankcard Scores and 2 Auto Scores.  Fo the life of me I can't remember if all scores are provided for EQ and TU.  The printable reports only show FICO 8.

I continue to use ABCD's graph as a reference. The impact of a 30 day late tapers off more quickly than other lates up to the 2 year point. Starting at 2 years it appears to me that 30 and 60 day lates track together - not that there is no impact for a 30 day late. If 30 day dropped to zero, you would see the blue line dropping to zero. 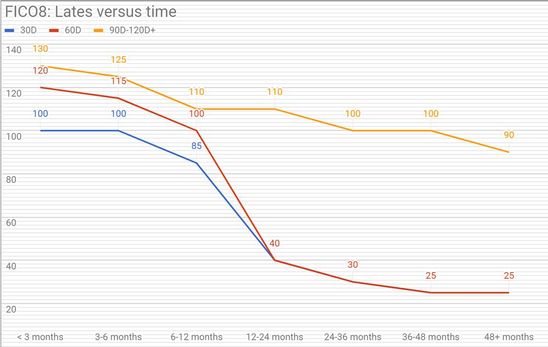 A few independent posters have mentioned experiencing a score drop of 80 points for a 30 day late when 1st received. Others have reported gaining 30 or 35 points when a lone well aged 30 day late falls off their report. I'd conclude a 30 to 35 point point gain should be anticipated.

Your 50 point gain on a 6 year late dropping off is in-line with conventional wisdom for a 60 day late. It appears to be a high side outlier for a 30 day. Although ABCD's data suggests otherwise, I believe 60 day late scoring penalties should track at a higher level than 30 day lates in the 2 to 7 year timeframe.