We were looking at putting wood flooring (Pergo so okay its fake wood) in  our house. It had been 1 year 9 months since I filed my BK7. I did have x2 Sych cards on my bk Amazon Store Card and Bill Me Later (now PayPal Credit) I think a total of $300 between the both of them. Note that I did want to pay down my low balances prior to filing but my attorney said not to. I did have a Lowes and a Home Depot card that was closed by the credit grantor both with 0 balances.  I knew I should not try for the HomeDepot card with Citi just yet even though Citi was not in my bk7. So my FICO 8's and 9's are ranging from 686 - 709. No lates since BK and I was at 2% utilization.  I swung and missed. My wife swung and missed as well. I got the 7 day response message and I shrugged it off. I got the denial via email by the time I got home. I called them and was told it was the bankruptcy but to wait until I got my letter to see why it was declined. They pulled TU which is my highest scores. So back to square one.

Strange thing is that Discover did not HP me. PenFed HP'd Equifax, Syncb pulled TU and USAA pulled Exp. My wife did not get a hit HP from discover either but got hit with . Her Discover graduated but only got bumped to $1k. My last credit pull was back in Dec 2018 (Khols Card) and my wife's was back in Oct 2018 (Auto Loan). He had pretty much been in the garden with little but substantial FICO raises (yes I will update my signature later.)

My scores dropped Friday 1 - 4 points across the board due to the inquiries. But I have gained 1 - 2 points back today across the board both Vantage and FICO.  I do expect them to drop once the new cards are added.

So in summary almost a year of gardening we inched up the scoreboard. Makes me wonder if I should have been a little more aggressive last year. I have almost x3'd my credit limits with x2 cards and my wife almost x2'd her CLI. I think it is safe to say that the 10k/7.5k discover cards are not bucketed and hopefully with Penfed I can get some decent CLIs.

I know the credit game is a long one and only the patient ones win. We were planning on trying for a HEL or HELOC in Jan 2020 but I think we are going to wait until 3 years have passed since I filed the BK7. We are so much farther then I ever thought we would be.

I accept the decline due to the BK. These are the reasons given:

Presence of a bankruptcy (Filed in Dec 2017)
Time since most recent bankruptcy is too short (1 year 8 months)
Total available credit on recently reported open bankcard accounts is too low (I am at 2% utilization out of $10,500. I alternate card balances and PIF each month. I was also 5% utilization last month)
Too many recently opened accounts (all of my accounts were opened last year 2018)

They also showed my FICO (Exp) as 634. The last time/only time I was a 634 was July 2018 and that was an Exp FICO 8 at that same time I was 692 FICO 9 which was strange to me. Now all that said, I am okay with the denial. I have hope with the "time since most recent bankruptcy" reason they gave. But I believe they used an old CBR information.  I did call them tonight to see if I could get the inquiry removed but was told I had to call back tomorrow.   My EXP is only at 12 inquiries over the last 2 years but if I can get it removed ... why not.  Anyone have any experience with trying to get an inquiry removed?  The USAA rep kept inferring they can see what they can do about getting a card issued so that gave me a glimmer of hope as well.  I did tell the rep that the Creditwise Fico 8 supplied by them is at 686 and that per the website that says it's the same score that they use.  (Yes, after the fact I realized that is what is stated on PenFeds site and not USAAs site)

Is the inquiry removal worth pursuing?

Well for starters you should both be congratulated on the nice haul you just accomplished especially with Discover. Well done. Now as to PenFed for starters don’t expect a CLI from them for awhile or even never. Many others on here will tell you it has taken them 2 years or more just to get any CLI from them. You joined them with a dirty file. (Don’t take offense just a term) just means you had a BK on your file so PenFed is unlikely to give a CLI. I have 2 of there cards for going on 2 years now and have yet to see a CLI.

Now USAA which I have as well is a pain in the you know what. The score they told you was because they still use FICO 3. I always found that strange about them. If you have an account with them you should see the denial message in you message center and the FICO 3 score. So I understand why you got confused with that. But since your BK is so new you will in general have to wait till it reaches the 5 year mark before they will consider a unsecured card for you. They used to have secured cards but took them down with a message that new ones are coming but that has been awhile so who knows when that will be. Ok I am rambling long enough. I hope this information will help a little anyways congrats again.
Message 2 of 6
3 Kudos
Reply
Highlighted

Im confused, you applied for credit, got declined snd want the inquiry removed because of denial?. Sorry, doesnt work that way. If it did, my report would be freshh with zero inquiries

. Once you apply for credit you have given permission to pull your report even if the creditor doesnt do so. Just chslk it up to the way of the credit game. Congrats on your other approvals. Ps i wouldnt necessarily call your 2k Disco card bucketed just takes time sometimes

Thanks! I was pleasantly surprised with the 10k starting limit with Discover. And I am just happy to get under PenFeds umbrella

As for USAA I read in multiple posts that they now use FICO 8 (beginning of 2019.) I thought that I read they moved from Vantage 3 and FICO 3 to FICO 8 but that may just be what they are showing on the website vs score to determine approvals.  EDIT: The denial letter does not indicate what score was used.  It s

@AverageJoesCredit wrote:
Im confused, you applied for credit, got declined snd want the inquiry removed because of denial?. Sorry, doesnt work that way. If it did, my report would be freshh with zero inquiries

. Once you apply for credit you have given permission to pull your report even if the creditor doesnt do so. Just chslk it up to the way of the credit game. Congrats on your other approvals. Ps i wouldnt necessarily call your 2k Disco card bucketed just takes time sometimes

Thanks, you could have knocked me over with a feather when Discover gave me a $10k SL. And I have to say the same about the PenFed cards. I was 1) just hoping for an approval and 2) if approved was hoping for a min $2k SL.

As I said I am okay with the denial due to my circumstances. I only asked about the removal of the inquiry becuase it appeared that they used the wrong score. I was under the impression that they used the FICO 8 that was displayed on their website. My FICO 8 is now 690 per the website.  Yes, it has gone up since the original post. I do not know where they got the 634 score. That being said the rep that I spoke with did tell me that they use an aggregate score for the last 7 years, what ever that may mean.

I asked about the removal because on my score tracking sheet I did have a 634 Experian FICO 8 back in July of 2018. I immediatly assumed (yes I know what they say about assuming) that they used the 2018 score and not my current score. My question was more geared at I wonder if I can have it removed vs demanding that it be removed.

Here's to hoping the 2k Discover card is not a bucketed card! I did not want to get rid of it due to the age it is my 2nd longest card I currently have. 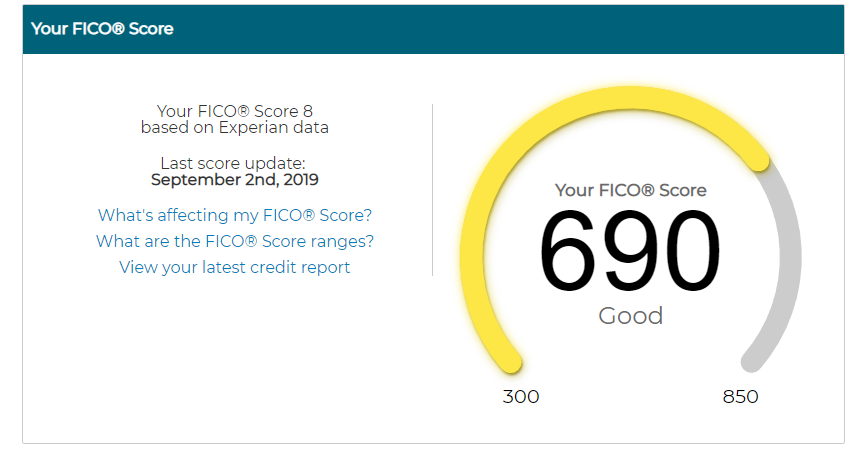 FICO 8 per the Creditwise USAA site. 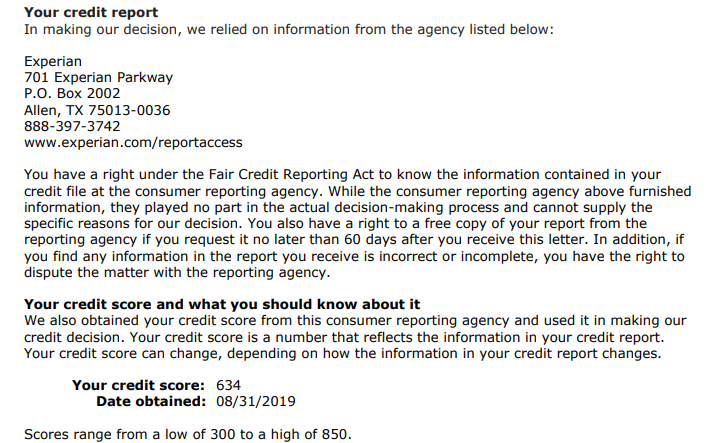 Per the denial letter from USAA

Ok, thats understandable. We just have to realize that often times lenders dont pull a report we think or use a score we usually get/receive. Even though Fico is most widely used, there are so many different models lenders use, its really just a crapshoot if they actuslly use our Fico 8 or 9s. Lol, ive been as high as 810 fico 9 and Penfed still denied me lol. Enjoy your new Disco its an absolute beauty of a card

Message 6 of 6
1 Kudo
Reply
† Advertiser Disclosure: The offers that appear on this site are from third party advertisers from whom FICO receives compensation.