Been eyeing this one for a long time.  Until now, I had no flat 2% uncapped, uncategorized (or better) cash-back cards yet in my wallet and this one fit so well with my military background.  (* I just recently added the Apple card on my phone but it's only 2% where Apple Pay is accepted.  And my CFU pays 2.25% UR points for travel on my CSR but not for cash-back.)  I decided the Power Cash was better in several ways to some of the other 2% CB options.  *As a veteran, I get the 2% whether I have a bank account with them or not due to the "Honors Advantage" program.

I even found I had a local PenFed branch so I decided to apply in-branch.  I had read about the double-pulls and hoped there might be a chance of combining. (A pull to open bank account; another pull to open a card.)  As it turned out, it was a double-pull anyway, both on EQ as typical, but that was fine as my EQ HP's were "0" until today.  The rep explained they use different computer systems for each approval and that is the reason for the double pull. Can't get around it.

I opened checking and savings accounts first and put a good deposit in each but not huge.  Then applied for the Power Cash Rewards.  It went pending so the representative called underwriting.  After a brief discussion, she announced I was approved for $15K limit at the lowest APR for the card (11.74%)!  I asked if there was any chance of a recon for a higher limit.   She called underwriting again and apparently the approval is computerized and they cannot manually override for higher.  Still, for what I've read about PenFed, great to even be approved and at the lowest APR and that SL!  And it sounds like CLIs come pretty generously with experience.

She surprised me when she asked which card design I wanted.  I didn't know that as a veteran you can choose from the standard dusty-blue design or an American Flag version!  It looked cool so I got the flag.  Later, I could not find the Flag Card pictured online but I think it's the blanks they used for the older PenFed Defender Power Cash.  I believe they may print them horizontally now instead of vertically.  I am displaying a picture below next to the standard card. 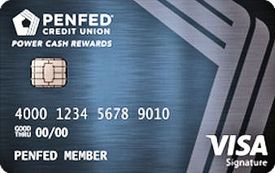 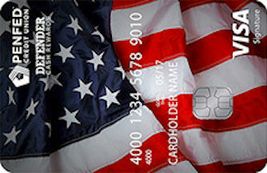 Glad to be in with PenFed!  They have some great products.

And I did a military double-dip today with a Navy Federal approval also!

$10k used to be the ceiling for new members. I think PenFed is loosening up a bit based on your approval as well as some others.

The PCR is a great 2% card. Hopefully, you'll get one of the coveted soft pull offers in the future.

Congrats on beating the apple

Message 10 of 18
2 Kudos
† Advertiser Disclosure: The offers that appear on this site are from third party advertisers from whom FICO receives compensation.