Our Forums' FICO High Achievers: Who has at least one FICO Score of 760 or above?

@strengthrehab congratulations 👏 It feels great doesn't it when you finally start thinking about yourself. Went through the same thing as you I've never been happier being free. Can wait to hit 760 across the board, I m between 730/745.

I've lurked for a very long time and always thought that good credit was never going to happen for me. Thanks to Covid and insane riots where we lived, we decided enough was enough and made the decision to move, though we didn't think there was any way we'd easily get a mortgage.

We ended up selling our home, moved across the country and really focused on raising our credit scores as much as possible. We paid a whole lot of attention to the boards here and am happy to say that last fall I was hovering around 610. After a whole lot of paying things off and other small tidbits, I woke up this morning to an all-time high of 793.

So thank you to everyone who provides such amazing advise here! It CAN be done and doesn't have to take years

Omg! That's awesome in such a short time. Would you mind sharing a little more of what you did? Was it just a matter of paying things off?

My updated report hit with my various scores and I'm so proud (it feels weird to actually write that).

This is surreal for me, honestly.

My fico 08 from transunion hit 842...just 8 more points to hit the elusive 850. That is in spite of having 1 inquiry showing. Meanwhile my EQ fico 09 dropped from 841 down to 827...14 points. It is hard to figure why these 2 scores had the marked increase and decrease respectively. My guess is that fico 08 liked paying off an auto loan leaving my mortgage as my sole installment debt. Fico 09 might have not liked the payoff. Just a wild guess, but usually my scores seldom move more than 5 points in any single month. Is 8 measly points too much to ask for? The 842 is my highest fico 08, or 09 score ever, I think.

I started this credit journey in 2015 after a divorce. I did the usual and started with "builder" cards...Credit One and Merrick. I had another CC from a credit union and a car note, too. I built up my credit using the builder cards for a year then went car shopping. I got that approval--that was my goal.

For the past 5 years, I got various credit cards and added to my portfolio...even bought a house. I was always "anxious" when creditors pulled my credit. My scores were stuck at the 660-680 level for years, partially due to my utilization on those credit cards.

Well, I finally got the nerve to apply for a debt consolidation loan from the credit union I financed a car through and was approved. I used that loan to pay off my credit cards. That was at the end of March. I then decided to re-up my MyFico monitoring to see where scores improved.  I also finally closed my "starter" cards (2 CreditOne accounts and the Merrick account)

I started seeing score fluctuations at the beginning of April. A little drop when the loan was reported. Scores were EQ 704, TU 696 EX 693 (so not bad)

Today, after all CC's reported as paid off (except for 2 with total of $200 balance) my scores are:

I was hoping for 780, but I'll take this. For once I know if I apply for credit, there should be no anxiety.

This is a huge milestone for me and I'm pretty giddy, but now the goal is to continue to improve. BY the end of this year, some 30 day late payments from back in 2014 should fall off (I think) which may get me close to my goal.

Anyway, thanks for reading.

High scores does not always result in an approval of a desired credit card. I was denied a Capital One Walmart card about a year ago with every fico 08 or fico 09 score over 820. Reason given was to many recent inqueries...2...that was all within the previous 12 months. The bad thing was, I had forgotten that Capital One does a triple pull. These 2 inqueries were not at the same CRA, so only showed 1 at 2 different CRA's. I was rather shocked by the denial. I suspect the fact that it was at the worst of the pandemic might have had some effect as well. Added to that is the Capital One Quicksilver that has never had a cent in interest paid in the 10 plus years I have had it, so they likely have identified me as a strict transactor. My point is, no matter how high that score is, approval is never automatic, denials can, and in my case did, happen.

I have no idea why Transunion suddenly started jumping the last 3 months....21 point increase since Jan. 17. For me, a 5 point jump almost demands a point party. My scores are generally very stable. 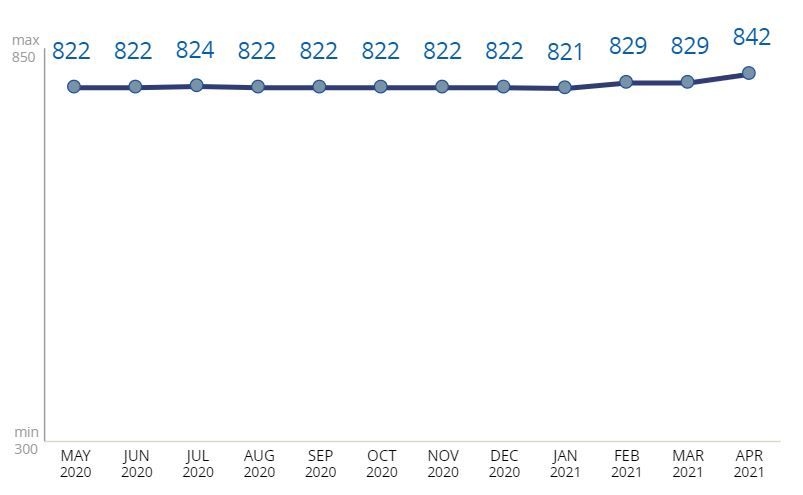 This sudden jump prompted me to buy a 3B pull.

This sudden jump prompted me to buy a 3B pull.

I had been in debt for a long time, but always kept paying on time even if it was minimum. I have paid a ton of money in interest over years, finally a year before I was in good position financially and made a budget and paid off all the debt within last 12 months. My last account was paid off a week ago and statement came in last week. Today I see this from Experian and my score is not boosted either. Pretty stoked after struggling with debt for such a  long time.

Congrats on that achievment, I need 8 measley points from transunion to reach 850. Funny thing is, the ad beneath your score says boost your score instantly....with an 850, I would bet against that. It is as high as it can go. For me it is a race against time as to whether I will reach any 850 score before my only installment debt is paid off, which will likely tank my scores. It is my mortgage though, so I will be glad to be done with that. In reality, does a score even matter once you have no debt, nor any need for debt? It may not, but still...I want an 850 on fico 08 or 09 on at least one CRA.

Message 2020 of 2,020
0 Kudos
Reply
† Advertiser Disclosure: The offers that appear on this site are from third party advertisers from whom FICO receives compensation.