Yea I don't see that either

Nothing for me, either.  Just financial disclosures about investment products.

I haven't come across that one either, but I did get a promo 7.99% interest rate offer for all puchases made in the next 6 months.

I have never seen those with Chase either.

I only recently found the Shop Through Chase bonuses... have to see if they're really crediting to my account but since I would've bought that laptop from Apple anyway on the FU, if I do get the 2 points per $, whee.

They just showed up under my wife's accounts, but not mine yet. As mentioned before, it looks just like the BofA deals, but the difference is you have to select deals for each individual card, and they're not always the same. For instance, Starbucks shows 10% under one card, 5% on a different card or not at all on another card.

Having to sign up for each card is both annoying and a good thing. You may get an offer from the same merchant more than once if it shows on different cards, but the annoying part is having to tap on offers for all your cards separately. We have 7 Chase cards between my wife and me, so we'd constantly have to check and select deals for each card.

The difference with BofA is that you select your deals for all cards at once, but the deal is only good until redeemed by one card. So no chance to get the same reward for different cards.

Now, my assumption is that since you have to sign up for deals for each Chase card, you'll get a reward from the same merchant more than once. But, if the deal disappears from all cards after it's been redeemed by one of the cards, then it sucks. It'd just be like BofA.

Do these offers come back as points or only statement credit?
Message 16 of 34
0 Kudos

It appears as statement credit only. Points would’ve been nice!
Message 17 of 34
0 Kudos

30% off (capped at $34) for Dick's sporting goods appeared for my CFU, I have not been using that card for a long time (chase actually sent me a check for negative balance) so they might have decided to use this to motivate some spending on it. Which worked, as I used CFU earlier at Dick's (it also stacks with Dick's 25% off for today which is nice).

No AMEX like 'you used offer' email from chase though.

IMHO, chase offers are not as generous as AMEX offers used to be (I had only 1 AMEX card for a long time and was able to get quite a few good offers for it, but with 10 chase accounts this is the only one meaningful offer, others are like 10% off lowes but capped at $6), also the APP's UI is designed that each account has its own list of offers, thus likely not possible to add 1 offer to multiple cards unless it appears multiple times.

I got the Chase Offers email on my Amazon Prime Visa.  They appear to be very similar to BoA's Bank AmeriDeals, which I've taken advantage of a couple times.  It's rare that there's a deal on something I can actually use.

If you haven't already received this email from Chase and are a Chase cardholder, I'm assuming you will soon.  It sounds like Chase Offers are going to be similar to the old Amex Offers or Discover Deals, something that many CCCs were getting away from.  It's good to see that Chase seems to be going in the other direction.  I know many people were very happy about the 5% on bills offer sent out for the Amazon card a few days ago, so it's nice to see something else good happening from the same big bank.  In my email it listed both of my Chase cards and suggested that offers were available on both.  I have not really looked into them yet, but wanted to make everyone aware. 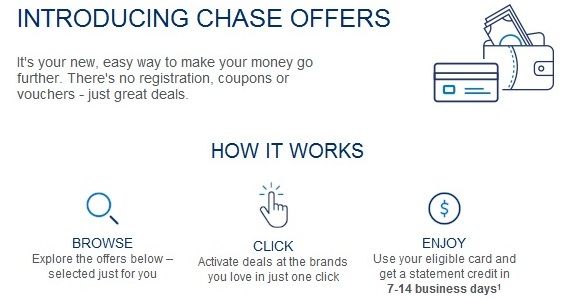 Message 20 of 34
1 Kudo
† Advertiser Disclosure: The offers that appear on this site are from third party advertisers from whom FICO receives compensation.