Can a Disputed/Deleted Collection come back?

Can a Disputed/Deleted Collection come back?

I recently just had a medical collection deleted through Experian's Online Dispute Center. I was pretty suprised (and delighted) to learn that they deleted it just a few hours after I submitted my request. The dispute is now completed and closed. Just waiting to hear back from Equifax now.

So I have a few questions.

1. I guess I just want to know what happens to a collection that gets deleted through a dispute. Does the Debt Collector know not to report it anymore? Or do they still report, but the CRAs just block it?

I've been in situations where a disputed debt tried to come back. The previous collector sold the debt and the new collector sent a letter stating that they were the new owners. I replied the the letter that I no longer owed the debt and somehow they never replied and left my credit report alone.

All I'm trying to do is pay off collections and keep a low DTI.
Message 2 of 4
1 Kudo
Highlighted

First, the fact that a collection is deleted after filing of a dispute does not necessarily mean that it was deleted by the CRA as a result of a finding in the dispute that the collection was unverifiable, and thus deleted due to lack of correction or verification of accuracy.

It is common for a debt collector, once they receive a copy of the dispute from the CRA, to simply report immediate deletion to the CRA, which removes the collection, and thus renders the dispute moot.

Did you actually receive a Notice of Results from the CRA, which clearly stated that they concluded their reinvestigation and found the collection to be unverifiable, and thus deleted by the CRA as a result of conclusion of the reinvestigation/dispute?

Second, if information is deleted by the CRA as a finding in the dispute (FCRA 611(a)(5)(A)), such deletions are never final.

Lack of verification can be overcome by providing later verificaiton (or correction, as appropriate) after the conclusion of the dispute.

More specifically, FCRA 611(a)(5)(B) requires that the debt collector must accompany any reported reinsertion of information deleted by a CRA with a certification of accuracy of the deleted information/collection before it can be reinserted.  Teh CRA must, if they reinsert, then send the consumer explicit written notice of the reinsertion.

The reinsertion provisions of section 611(a)(5)(B) after conclusion of a dispute apply to anyone who later reports the deleted information, and not just to the furnisher of the previous dispute.

Thus, if a dispute is concluded by deletion of a collection reported by a debt collector, then subsequent reporting of a collection on the debt by any other debt collector must comply with the certification of accuracy provisions of section 611(a)(5)(B) before the CRA is permitted to resinsert.

Did you actually receive a Notice of Results from the CRA, which clearly stated that they concluded their reinvestigation and found the collection to be unverifiable, and thus deleted by the CRA as a result of conclusion of the reinvestigation/dispute?

I'm not sure. They sent an email notifying me that my "dispute is completed" and to login to see the results. One of the first things I see when logging in is a statement saying this: (see screenshot) 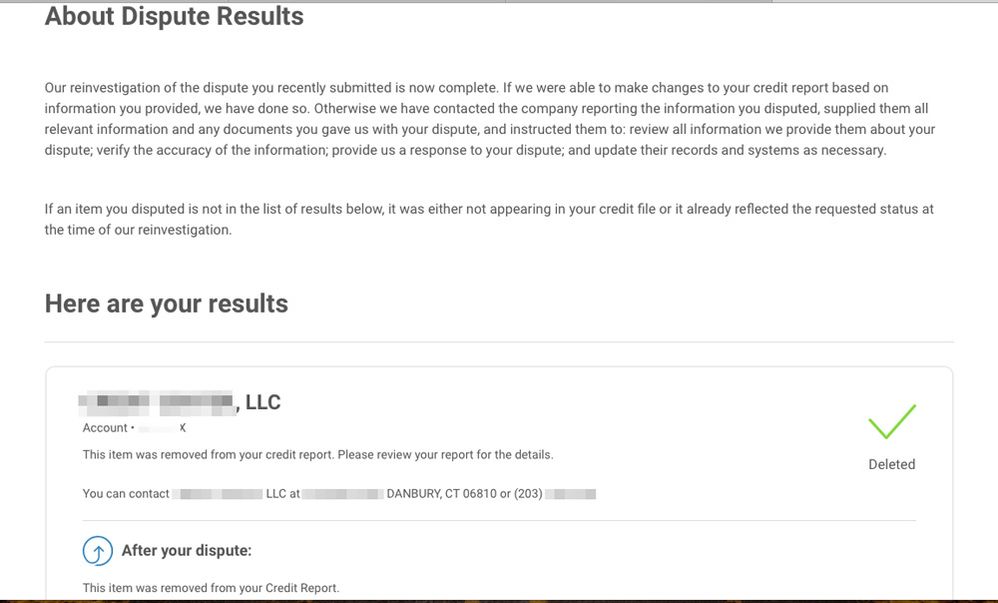 If you're asking if I recieved a special document or letter titled "Notice of Results", then the answer is no.

The item disputed was a $25 medical debt that I do not believe is mine (I do not have a physician with, nor have I paid for a physician's services through the Medical Co. that is the OC). I sent a DV letter within the 30 day timeframe to the debt collector via Certified Mail because I wanted to know more information about this alleged debt. They have yet to send any information to validate the debt. I uploaded supporting documents with my dispute.

GOAL: 760 across the board by 2022 to prepare for a mortgage.
Message 4 of 4
1 Kudo
† Advertiser Disclosure: The offers that appear on this site are from third party advertisers from whom FICO receives compensation.