I know you are all hard at work with your credit goals.  Have you progressed as far as you hoped?  Were there any unforeseen expenses that cropped up and may have thrown you off schedule?

As a reminder, participation in these monthly check-ins is optional but encouraged. The goal is to help keep you on track, so feel free to post your progress updates here. This is a no-judge zone; feel free to say what's keeping you up at night or give yourself a Kudo for having it all together.

What's up @Kenny?. Staying warm and dry hopefully.  Ty and have a happy February 👍🤸😋

Alright challengers, two February's ago Life looked rather freaky.....goals this February is not anything near the likeness of the "damage control" we were implementing for fear of the banks freaking out and yanking everything back during the height of the Pandemic.

Anyhoo... Gonna be prepared for the next surprise best as possible, meaning, saving more, spending less.

I spent a LOT more money in January than I normally do, but I feel good about it. I'm having my bathroom redone, and I also bought a new refrigerator. I spread out the charges across several cards, so my per-card utilization wouldn't soar on any one card. Thanks to high overall CL and lots of zero balances, my overall utilization didn't soar either.

Over the next few weeks I'm going to sort through the mountain of BT (and similar) offers I receive, then start playing my favorite game, Balance Transfer Bingo! It's going to take a little thought because some of the purchases were on 0% promo offers, some I made specifically because of that card's CB rewards, etc. I want to end up paying no interest/fees on any of this, but that may not be 100% doable. All of my recent BT offers have been 0% but they've all had a fee, ranging from 2-5%; I haven't received any with no fee lately, so unless one comes along pretty quickly, I may end up having to go with one that does have a fee. Or I could just pay them off, but I really didn't want to dip into savings for this. In the past, my game of Balance Transfer Bingo has worked out nicely in similar situations, so we'll see.

Other than juggling balances around to pay as little interest/fees as possible on these large purchases, I don't really have any goals. I guess you could say THAT is my goal! Juggle them around so they end up with the best terms for the longest time.

Hello everyone.... My first month in the garden was wonderful... No new inquiries. A collection account was added (bogus) from an apartment I lived in. I'll just sue/bring them to court to explain to the judge how they calculated their figures.  I'll tackle that project in March. However, I paid off two charge-off accounts that were reporting monthly. I've opened a DCU checking and savings just to get paid 2 days early through direct deposit. This months goal is to implement the AZEO on my revolving credit cards, no new accounts of ANY TYPE.... at this point.

Happy February! Goal this month is to lay low, keep paying everything on time and get TU to have a dark green circle. It has been so resistant to getting there. My AZEO experiment is complete, just waiting for EQ and TU to catch up with their reporting before I publish my findings.

I lost my only two INQs on EQ, three on TU and will lose two on EX in a couple of days.

Paid all of my large obligations in January and had an additional large unexpected obligation come up. Thankfully, I have four cards with 0% for at least the next year, so I'll carry some balances for a couple of months. I won't have to carry a balance on my AmEx at 1.99%. 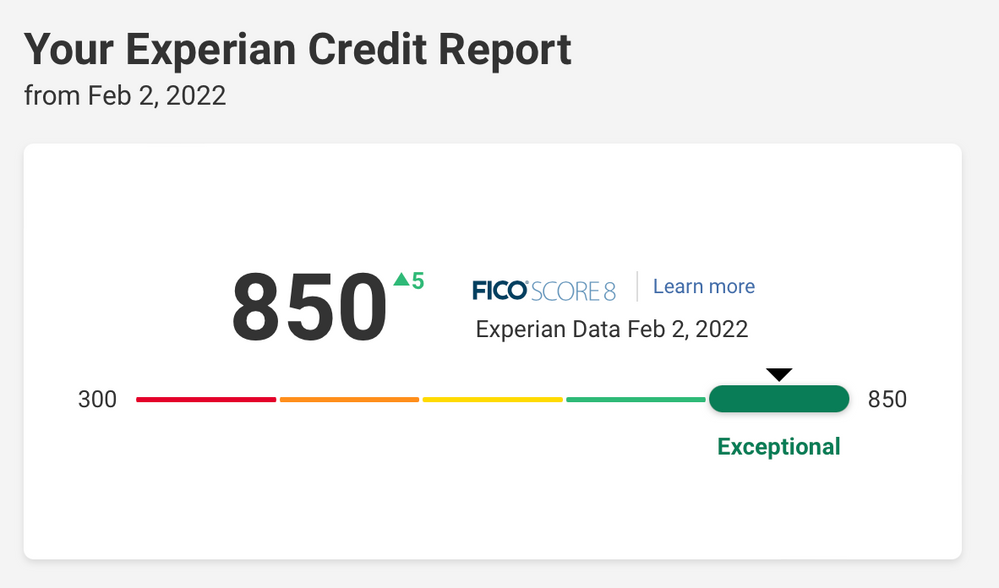 @Junejer look forward to the update👍

"My Take Home Pay Don't Take Me Home"
Message 10 of 28
1 Kudo
† Advertiser Disclosure: The offers that appear on this site are from third party advertisers from whom FICO receives compensation.