Buffers - Is there a max?

Buffers - Is there a max?

I was briefly at 850 on EQ and TU a little less than year ago before I opened a new revolver.  They reacted differently, but not harshly in either case and the consensus was that at for F8 - 850 scores there's a buffer where I assume that means there was some sort of reserve above 850.  Only lost 1 pt with EQ for new acct, recovered to 850 very quickly.  A little more of a hit for TU which took a bit longer to get back to 850.  For me, TU has always been the most sensitive to UTL and the new account was for a bed purchase so I'm not sure how all that played.

Trying to figure out if a max score is 850 and there is a "buffers", is it limited?  I'm not concerned about retaining 850s, just understanding how buffers work.

I don’t think anyone outside of the fico designers know that @Trudy! I’d sure be interested in hearing from some of our knowledgeable members as to their best guess as to how high the buffer goes behind the scenes.
-Our Community’s updated scoring wisdom: Link to Scoring Primer.
-For Negative Reason Codes see: CassieCard’s Score Factors thread.
-ccquest’s workbook to calculate metrics for you: Link to Workbook.

(Everything said is JMHO and is not endorsed by FICO or MF. I have no affiliation with either, just a grateful member.)
Message 2 of 6
1 Kudo
Reply
Highlighted

Thanks @Birdman7 .  Just curious. Since all of you knowledgeable folks have figured out other "undisclosed" information and this may impact me thought I'd toss it out there.

I'll surely let you all know my results when I open a new credit line, which I'm thinking about (auto).

That one’s a little hard to measure. I’m open to ideas as to how we can measure it though.

(Everything said is JMHO and is not endorsed by FICO or MF. I have no affiliation with either, just a grateful member.)
Message 4 of 6
1 Kudo
Reply

There were multiple threads discussing Fico 8 buffers a few years back. There are a couple schools of thought on this:

1) Category buffers that could be in play at scores below 850. This is suggested by the observation that some profiles within the same scorecard see score changes relating to a certain magnitude shift in a scoring attribute while other profiles see no score change. [Number/% of cards reporting balances is a common example]

2) Buffer only exists above 850. The ability of score to remain stable at 850  even though various attributes change significantly indicates presence of a buffer. [For example, new accounts can be opened and/or hard inquiries added without score dropping below 850. Also, utilization levels on individual cards may exceed 50% without score dropping below 850]. However, i should be noted that this increased score stability could result from category buffers as well.

I came up with 8 to 30 points buffer depending on CRA and enhanced version used. I'll post my table below. I dipped to 845 on TU Classic Fico 8 10/2018 so the buffer threshold was breached on TU. Experian Classic and Bankcard have always been insensitive to # cards with balances for my profile so the buffer on EX appears small based on Bankcard high-low. However, if Auto version is used, EX buffer is much greater. I realize the enhanced score overlay has an influence on score itself. Thus, this approach for estimating buffers has limitations. 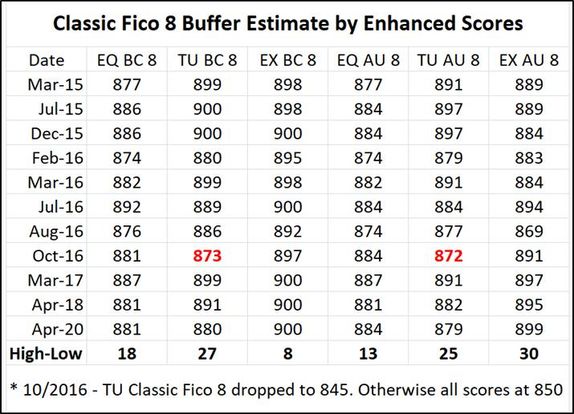 * If I take off 5 points from the TU differences for Classic at 845 vs 850 in October, then TU Fico 8 buffer is 20 to 22 points. I have never been at AZEO which would have boosted my EQ bankcard score past 892. So, EQ buffer would be somewhat higher than 18 points. My EX Bankcard scores are often buffered thus muting high-low.

In summary, I believe there are category buffers some of which are likely reached at scores below 850. The aggregate amount of buffer available on Classic Fico 8 is nominally 25 +/- 5 points by my estimation.

Thanks @Thomas_Thumb .  I will likely be able to use this to test my buffer in a few months.