Did they remove the CO???

Did they remove the CO???

Prior to me getting the results in the mail, I received numerous alerts for "improved account". Looking at the pic below, did the creditor remove the CO??? That's what it looks like to me. If so, can I get this to reflect on EX by sending them this paperwork??? Equifax just deleted it, so I'm not arguing with them at all. Any advice would help. 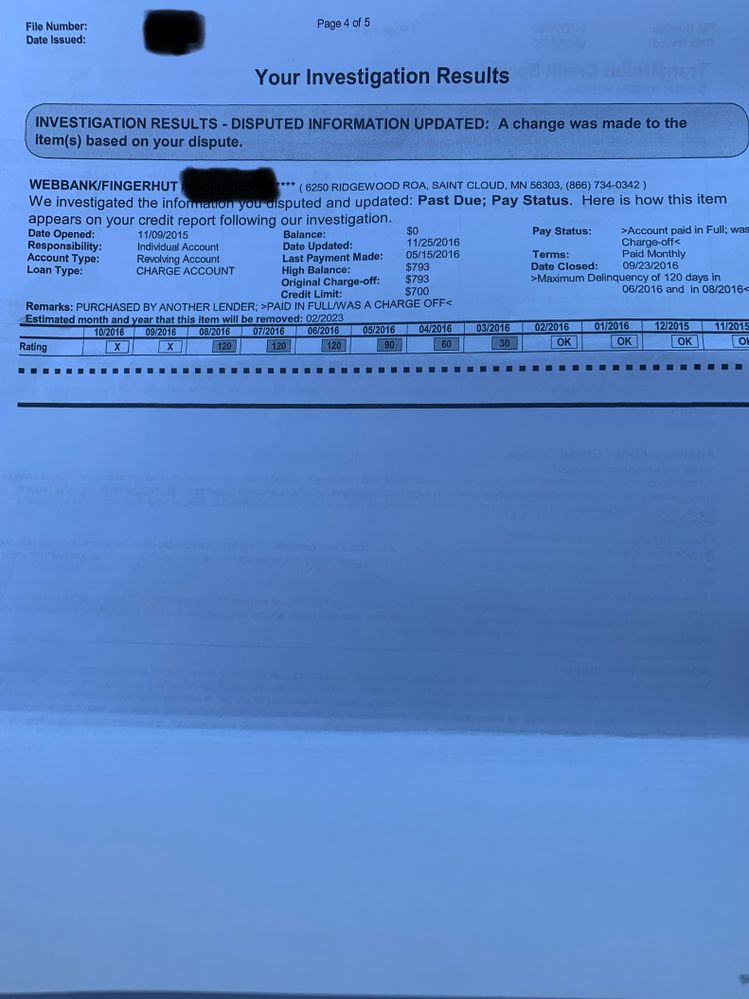 It's still there. CO is not a derog per se, derog is the worst delinquency on the account, which in your case is 120 days.

To me, based on your screenshot, they corrected the last payment/activity date.

Also, it looks like you have a double whammy there, CO that got sold to collections. Is that still on your report?

They didn't remove it from your report, based on the screenshot it's still there. Why did you dispute it based on the incorrect date of payment? Absolutely no point to that...doing so will just update the reporting date and possibly cause a score drop. All that matters is that they have the date of first delinquency correct.

Also, no, even if one CA removes a negative item doesn't mean you can just show the other CAs and expect them to automatically remove it too.

The account shown in the shot is still on EX and TU. It says "Sold to another lender" but it was just transferred to their collection department. There was never a separate CA that reported, never.

I ask this bc prior to the dispute, I had CO reported monthly in the payment history from when it CO'd in 2016 all the way until I PIF 6/2019.

So what it looks like now is, after the update, it looks like the account became current and PIF in 2016. They took out all the CO in the monthly history and in turn made it look like it happened 3 years earlier now. Am I wrong???

Yes, I completely understand that could of happened by disputing it. They were reporting CO every single month in the payment history until I PIF 6/2019.

I disputed bc it looked like I PIF 6 months ago, when in reality, it was brought to $0 a year ago. Luckily it didn't update and bring the CO current.

You are wrong. Those X does not mean current, it means "No data", as in nothing reported.

COs typically report for years until they are satisfied or sold. You paid, it stopped reporting.

Because of your dispute, everything past the delinquency that lead to CO is removed.

I hate to be the bearer of  bad news, but nothing ground shattering happened here.

I'm sorry, i didn't explain that correctly. It was reporting monthly CO all the way thru 12/2019. They were reporting negative info after it was PIF 6/2019.

I disputed so they would correct that, and make it so the last CO reported 6/2019 like it should have. Before the dispute, it was reported CO in the history every month since 11/2016 when it was initially charged off.

So now, with the results, they effectively brought it PIF current back to the initial CO date. So now it looks like I made it current back then, and not when I really did 6/2019.

That account reporting is a mess now. It shows your last payment as being in the middle of the delinquency but then says the charge off is paid in full. It's pretty much impossible to figure out what happened with that account now.

Of course the only thing that actually matters is that it was charged off. That is going to always be the case until it falls off in 2023.

A creditor reports, once a CO has been taken, the fact of the CO and the original amount of the delinquent debt at time they took the charge-off.  That remains as a sticky post regardless of whether CO is also reported in the payment history profile or the current status.

The CRA reporting manual provides a creditor with the option, when reporting either current status or reporting payment history profile, as showing the delinquency level either as the number of days late (e.g., 30/60/9-/120-days late), OR alternately, if the account has also been charged-off, simply as CO.  The days late is then computed from the reported DOFD.

That only removed use of CO under the payment history profile, but did not remove their separate reporting of the original amount of the CO, and their reporting of current status as Paid, was a charge-off.   That is consistent.

Their reporting that they took a CO is estimated to be removed at 7 years from DOFD, which is stated to be 02/2023.

It all now looks clear and proper.....

Message 10 of 18
1 Kudo
Reply
† Advertiser Disclosure: The offers that appear on this site are from third party advertisers from whom FICO receives compensation.