While I understand the basic premise of being 're-bucketed' when there is a major change to your credit file (good or bad) can someone tell me how the buckets are defined? (I think the term is buckets or bucketing).

Ex: A OP indicated they finally got the COs and CA off their reports and someone indicated they would now likely move to a different 'credit bucket'.

https://ficoforums.myfico.com/t5/Understanding-FICO-Scoring/General-Scoring-Primer-and-Version-8-Mas... has a great explanation on FICO scoring including bucketing and rebucketing.

Scroll down until you see this image and read that section. 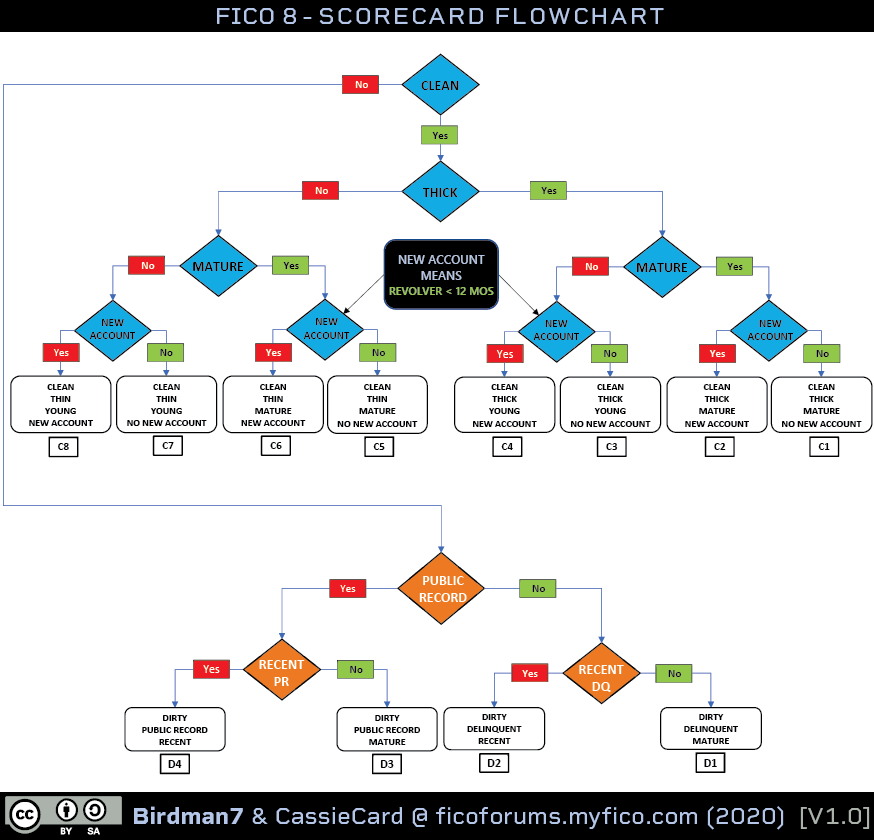 What you are referring to are scorecards - scorecard assignment and reassignment - often called 'buckets'.  It's fairly complex but the best rundown is in the FICO General Scoring Primer thread.

The first post discusses scorecards - the post is a bit long but scroll down and you'll see the 'Scorecards'  title of that section in bold.

The entire thread is worth a read tho...

If you have any questions after reading, feel free to post them.

Personal Aphorism:
"Forget What You Feel, Remember What You Deserve"

Without patience, we will learn less in life. We will see less. We will feel less. We will hear less. Ironically, rush and more usually mean less.
Message 3 of 12
3 Kudos
Reply

That is exactly what I'm referring to. Thanks for the reminder; the positive effects of my coffee wore off about 4 hours ago so brain is fuzzy. Appreciate the info.

Two minor points for the OP based on some of the original post comments.  First, scorecard reassignment doesn't need to come from a "major" profile change.  In fact, sometimes one doesn't even realize that they have been rebucketed since the change was seemingly so minor.  One example could be AoYRA moving from 11 months --> 12 months in age on a clean file.  Second, whoever referenced not being rebucketed after the removal of all CAs / COs may or may not have been correct.  If those were the only negative items on that individuals CR, they certainly would experience scorecard reassignment.  If they had other major negative items like 90D+ delinquencies however, they would remain in the same dirty scorecard with the removal of the other major negative item types.

(Everything said is JMHO and is not endorsed by FICO or MF. I have no affiliation with either, just a grateful member.)
Message 6 of 12
1 Kudo
Reply

Thanks @dustind, that flowchart helps me a lot; while I understand the concept of bucketing, I've never seen that chart before.  In my case, I'm a D3, so depending upon how the whole Thick/Thin and Mature/Immature thing works out after both my Chapter 13 and my newest new account ages out to > 12-months by April of next year, I could end up being in C1, C3, C5, or C7.

Regardless, I'm looking forward to seeing what happens.

I categorically refuse to do AZEO!

I honestly don't know, but I'd lay odds the higher the number the lower the credit scores.

I categorically refuse to do AZEO!

I honestly don't know, but I'd lay odds the higher the number the lower the credit scores.

@House2021 yes, no one outside fico knows the ranges for sure, but they can overlap as well.

@Horseshoez Yes typically you would think the lower the number the higher the score, but as stated ranges can overlap and there are many reasons for exceptions.

Take somebody on C1 with high utilization, inquiries, and new accounts compared to somebody on a D1 optimized. The latter could be higher, especially if you threw a 30 day late in on that C1.

but if they were all optimized, you're right that's the order they would follow.

(Everything said is JMHO and is not endorsed by FICO or MF. I have no affiliation with either, just a grateful member.)
Message 10 of 12
1 Kudo
Reply
† Advertiser Disclosure: The offers that appear on this site are from third party advertisers from whom FICO receives compensation.