@Spotsy they cut the credit line from 15k to 500. I was the one that closed the account. I am fine with the situation. I agree with your interpretation of their "reasons". They are exactly my situation lol.

FNBO was a "flavor of the month" card last year on this board, and I got caught up in the hype. I use my Evergreen card, but could easily close that one as well since I have other 2% reward cards. I never used the Getaway card since with Covid restrictions and travel chaos, I don't fly nearly as much as I used to so I don't need travel rewards. The new $500 credit limit will probably report, but it will report as a closed line. I'll deal with any fall out from my other cards as they come.

My fico is strong, my debt is low, (except for student loans but that is another topic for another day lol) and my income is solid. I can withstand the loss of a few of my cards.

Moral of my story: Use your FNBO cards if you want to keep them.

@lgtwriter, Sorry for your CLD

I whole heartily agree with you on using ones FNBO cards.

It is going to be "use it or lose it" situation.

I believe they are proactively mitigating "risk" , not that specifically you are a risk.

We are entering an environment where credit card debt is escalating, and some lenders are starting to take action,

before they could have massive loses. 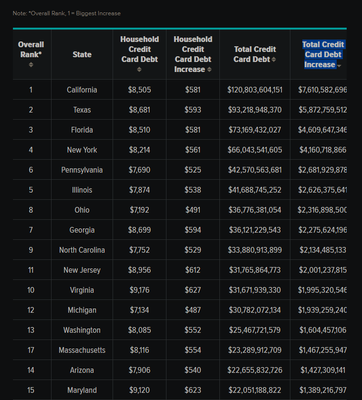 I posted this in another thread as a reply yesterday, but I just wanted to raise awareness by starting a thread of my own. I received a letter in the mail yesterday from FNBO. I have two credit cards with them, the Evergreen Visa with a 15k credit line, and the Getaway Mastercard with a 15k credit line. They cut my credit line on the Getaway card from 15k to 500 dollars. I called and closed the card immediately upon receiving the letter. Here are my data points:

I never used it much (about two or three under $50 purchases in a year I think).

I have about 6-8 inquiries on each credit bureau and have been in the garden (except for credit line increases) for about 8-10 months.

The reasons they gave for the credit line decrease (these are taken directly from the letter they sent) are:

I had the card around ten months, my pattern of use was no use really lol. And my current balance was zero.

My other FNBO card, the evergreen card was left at its original 15k limit. I use that for doordash, online purchases, etc so they get a lot of swipes from me. I pay it off most months but sometimes leave a small balance (under $500) and pay it off the next month. I currently have a balance of about $500 on the Evergreen card that will be paid off when it's due the first week of October.

Anyway, I would be careful to make sure you use all your FNBO cards. This is just a data point. I have nothing on any report that would have caused FNBO to cut my limit like that except non-use. As I said, I closed the getaway card. For now I am keeping the Evergreen card open, but I am going to cut down on usage. Since I have gotten credit line increases on several cards in the last couple of months this will result in about a net $5k loss in overall credit for me, but I have way too much credit anyway (over $250k of credit limits)

Since my credit line decrease is non-use based, it might not affect anyone else here, but I just wanted to post this thread as an FYI.

I think it's ridiculous when a bank does something like that to a customer like you, who is basically gold.

I think it's ridiculous when a bank does something like that to a customer like you, who is basically gold.

But IMO it's a big jump of faith for them to conclude that the customer is basically "gold"   Sure, not a credit risk, but scores 790+ are hardly rare, and the OP hasn't shown a great deal of value on either card.    Yes, in future things may change, but (probably more likely) they won't, and FNBO is reserving a fairly large credit line that could potentially go to other customers who would generate more swipe fees (or even low-risk interest, slobber slobber!)   And the cut to $500 may have worked as intended, if the OP has wanted to "mend his/her ways" they could have put lots of charges on, cycling the limit.  The fact they closed the card showed they were fine without it, and now FNBO has the whole CL back to do with as they need

Not every card user is going to charge large purchases every month and pay them off quickly. I would think leaving large balances on a card in this economic climate is also perceived as a risk. As with anything credit related, YMMV.

Not every card user is going to charge large purchases every month and pay them off quickly. I would think leaving large balances on a card in this economic climate is also perceived as a risk. As with anything credit related, YMMV.

I didn't mean "no value, "great deal" as in "large amount"  @SouthJamaica used some term such as "basically gold" which, to me, implies of high value to the credit card issuer, giving them a LOT of  income from swipes, fees etc, and from what you said, you weren't providing that "great deal of value" to justify the label.

And sure, the bank is happy enough with your spend on the still open card, but clearly not so overwhelmed that computer checks didn't trigger on the other cand saying "Oh, no AA on this customer's account"

I didn't mean to demean your spend, your credit or anything, just disagreeing with SJ that the bank should tread more lightly.

Thanks for the data points on FNBO, @lgtwriter.  I previously had a low-interest rate card with them but closed it when it was no longer needed.  I like FNBO but didn't know that they were more sensitive to spending and usage patterns.

In general, though, this is a great reminder for the overall topic of credit card usage, not just for FNBO.

Definitely sounds like it was closed for non-usage. Thanks for the DPs.

Thank you, OP, for the data point.  I have the Evergreen which doesn't get used due to the minimum redemption requirement.  I got it for the 0% APR at the time and it served its purpose.  I have been wondering how long it will take them to close for non-use.

@wingennis I had my card around ten months give or take. They cut the limit and I closed the card myself. some people might want to keep the card in those circumstances, and try to groom it back to growth. For me it was a "cut my losses and move on" experience and choice however.

I will probably close the Evergreen card as well once I pay off my balance on the due date the first week of October. I really don't want to have to charge a bunch of stuff on cards to keep them. In the tightening economy, I am willing to close some cards. I don't need the padding, and I don't use the cards, so I don't mind trimming my collection here and there.

I never needed either FNBO card to be truly honest lol.

Message 60 of 285
1 Kudo
Reply
† Advertiser Disclosure: The offers that appear on this site are from third party advertisers from whom FICO receives compensation.