How accurate is Amex’s FICO Score?

How accurate is Amex’s FICO Score?

Recently just applied for Amex’s Everyday CC, got approved. Set up my account, decided to enroll with their available option to check my FICO score. FICO score was 783, but I was surprised to see one of the “factors” affecting my score was “1) Time since derogatory public record or collection is too short”.

I know this is incorrect because I have never missed a payment on anything, never filed for bankruptcy, etc. I checked my reports and they are not reporting any derogatory public record.

You posted recently about a deleted collection on Experian. Amex is still using older hard pull.
Message 2 of 11
4 Kudos
Highlighted

My recent post was a question I was asking on behalf of my husband. He had a $25 medical collection (now removed). I’ve never had a collection or public record on my credit report.
FICO Mortgage Scores: 736, 725, 737

The husband is not metioned

Unless you've done this by now, go get your reports and look over them https://www.annualcreditreport.com/index.action

Maybe there is something older you forgot about

The score is 100% accurate on the date that it was calculated.  It is a FICO 08 (the most common and widely used model) score based on your Experian credit report.  Agree 100% that you should get a full copy of your credit report from Experian to make sure there's nothing listed on there, whether correct or not.

Your FICO 8 score in your signature from just last month shows 710.  A month later(today) you say that Amex has you at 783.  Unless you had extremely high overall UTI last month, an increase of 73 points in a 30 day span tells me something favorable happened such as the removal of a collection that doesn't exist.

The fact that OP said she had to "enroll" for the "FICO" score, I suspect the score could be Vantage under Amex's new MyCredit Guide monitoring service, don't remember having to enroll for FICO 8, it just showed up after a few cycles.

OP, sometimes the FICO interpretation provided by American Express has explanations for the score that don't make much sense. I always get the jazz that I don't have enough accounts paid as agreed with the further admonition that I may not be paying all my accounts as agreed. The score has been 819 since Amex began to provide that info with only a slight variation in the score. Lowest American Express reported was 812, I think. Utilization based as far as I can tell.

Discover often reports the same score as American Express with suggestions as to how to increase the score and the caveat that the score is high enough that any actions will have minimal if any impact on the score.

I have never had a late or any derogs.

Amex reminds me of that stern parent who is never satisfied with anything an offspring does. I had a  grade school friend who was a total braniac. We got our report cards knowinng she would have the highest marks. She broke out in tears when she opened hers. Sataight As and she was crying. We asked her why. She said her father would be disappointed because she didn't improve from the last grading period.

Yep, he was the guy who was never satisfied with anything his family did. His wife's cooking was not good enough. He compared her to my mom who was a scratch cook and home all day. His wife worked and prepared meals after work. Dumb stuff like that.

@oldman87 wrote:
The fact that OP said she had to "enroll" for the "FICO" score, I suspect the score could be Vantage under Amex's new MyCredit Guide monitoring service, don't remember having to enroll for FICO 8, it just showed up after a few cycles.

Also, I second the suggestion that the OP pull her EX report if she's genuinely worried about it.   She can get it a number of places for free.

Hi. For whatever reason, the "public record/derogs" went away a few days later. I did pull my full CR and there weren't any public record or derogatory items listed. It must have been an error. Thanks for your input! I'll post a before/after screenshot here just for reference or for anyone who might find it helpful. 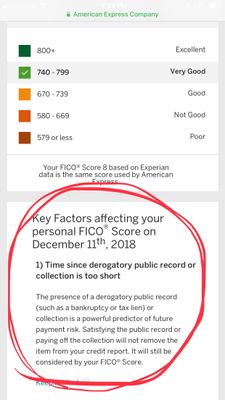 After (After Amex stopped reporting a public record/derog item) 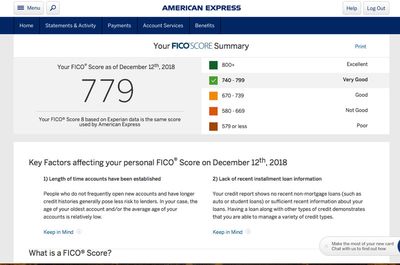 GOAL: 760 across the board by 2022 to prepare for a mortgage.
Message 10 of 11
1 Kudo
† Advertiser Disclosure: The offers that appear on this site are from third party advertisers from whom FICO receives compensation.